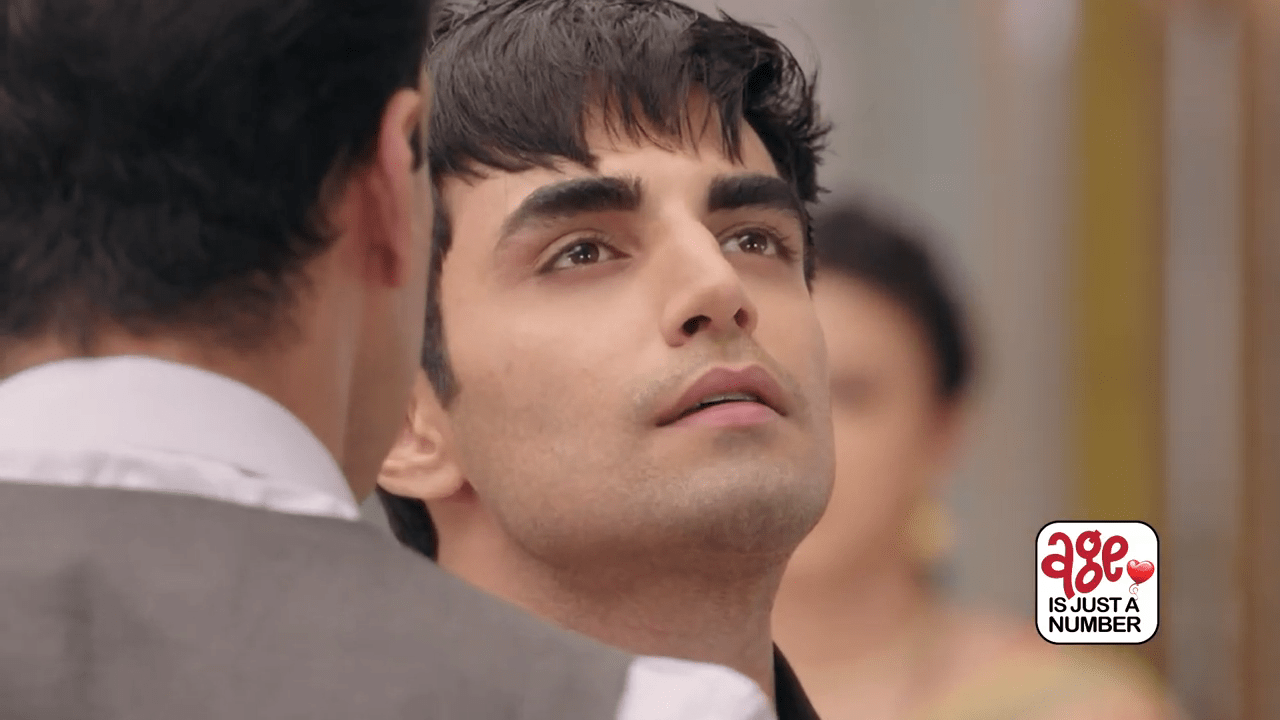 Age is Just a Number 17 September 2020 Update starts as Vaidika sings ‘Hansi Bann Gaye…. Nami Bann Gaye’ Sahil gets some past but vague flashes with Vaidika. Vaidika was crying while she sang.

Bhoomi takes Sahil’s attention and puts the ring into his finger. It was now Sahil’s turn but he instead walks toward Vaidika and puts the ring in her finger. Tears slip Vaidika’s eyes while the lights were turned on. Vaidika thanks him for returning her Sahil to her.

Usha calls Jackie back, but he turns around and says he is Sahil because Vaidika says so, he can see the truth in Vaidika’s eyes. Bhoomi comes in between and asks what Jackie is doing. Sahil’s head was now banging and says he doesn’t understand who he is, Vaidika claims him to be Sahil and Bhoomi calls him Jackie. Bhoomi says Sahil died a long time ago, Vaidika has gone insane because of him.

Usha tries to intervene but Vaidika tells her to stay away. Sahil had severe head ache. Bhoomi says it’s because of the injury in his head, the truth is that he is Jackie and they are marrying soon. Sahil goes to the room. Bhoomi and Usha also leave. Bari Amma apologize the party guests for such situation.

Vaidika speaks to Bari Amma that they must take Sahil to a doctor. She understands that they think he is Jackie, but that’s not the case. He is Sahil and is extremely confused now.Vaidika sat with the doctor who tells her that Sahil has an injury in his head, he suffers from diffused brain injury. They still need to calculate what Sahil remembers and what not.

Usha comes to Bhoomi in the room. Bhoomi was upset and wonders if she will never get Sahil. Usha says she will. The doctor told them that Sahil doesn’t remember what happened yesterday, he only remember the present. They will continue to assert him being Jackie.The doctor tells Vaidika they can’t be sure if Sahil’s memory would ever recall? Vaidika says at least she now knows what can be her strategy. She decides to remind Sahil who he was.

Vaidika brings Sahil to her old house. She says doctor claims that his past memories are all collected in a corner of his brain, she will continue her tries to remind him of his memory. She will leave no stone unturned and will bring his memory back each day. Sahil looks behind to see Vaidika. Vaidika points towards him to move forward. He comes to touch the name plate of Vaidika and Sahil’s house, then unlocks the door.

Vague flashes from the past again flash in his mind. He comes to the yard. Vaidika silently prays for the strength, she can’t know the consequences of her actions but wish to bring Sahil out of this trouble.Sahil looks around towards their past photos all hung over the walls of the house. History flash in his mind. He looks around towards the light décor Sahil had once done for Vaidika. He wonders what’s happening to him, he feels connected to this house. Vaidika thinks she wants to remind Sahil what he once did for her.

She touches the huge board with alphabets of LOVE. She then brings a box towards Sahil as a gift. He opens the box up and finds the blue dress in it he had once gifted to Vaidika. He holds the saree, his eyes open wide while his past memory continue to flash. Vaidika asks if he feels or remember anything, he once did the same for her. Sahil looks upstairs and walks the stairs.

Vaidika recalls a rule book she had given to Sahil. She brings it from the closet and asks if he remember this book, and the handkerchief? She shows him the bag he brought when he came over to live here. Sahil asks if this is his. Vaidika now cries, holding Sahil’s face she requests him to try and recall. She then brings Sahil to her room and reminds him he celebrated her birthday in this room; their birthdays are on the same date. He even sang a song for her. She was about to slip in front of Sahil.

He holds her by waist. His head bangs badly. He confirms Vaidika if this happened earlier, whatever she is saying. He was about to faint due to stress and fell on the floor unconscious. Vaidika panics and calls the doctor for help.At Agarwal house, Mandagini was reading a magazine in the hall. Deepak comes in. Mandagini daydreams about a song playing while Deepak stood as her Super Hero. She runs to Deepak. He was shocked and moves her shoulder asking if everything is fine? Mandagini runs inside shyly.

The next morning, Bari Amma and Nani were tensed. Vaidika and Sahil return home. Vaidika says Sahil was sick, and had to be kept in hospital for observation. Sahil says he doesn’t remember anything, when he woke up Vaidika was there with him. Bari Amma complains that Bhoomi took advantage of their absence and took Ved to his school’s Christmas party.

Usha comes there and says the mother who brings up a child holds more importance, Bhoomi could take him. She tells Sahil to go to school as he has to bear the responsibility of his twin brother’s son. Vaidika tells Usha that Sahil will go to school, but she needn’t scold him pointlessly. When Usha and Sahil had gone inside, Vaidika tells the ladies that this is surely Sahil. He lost his memory and even remembered things when she took him to her house. The doctors warned not to burdened his mind, and he might not ever gain his memory back; but she can never leave his side. Bari Amma was proud of Vaidika.

Mandagini meets Deepak at the function in a white dress. She says she knew Deepak was wearing white, so she matched the dress color with his. Deepak remembers she had come to his room in the morning and suggested him to wear an orange dress but Deepak chose white over her choice.

The function starts with Vaidika’s dance performance. Sahil joins Vaidika on the stage and they dance together. Afterwards, Sahil complements Vaidika’s dancing skills. Vaidika thinks Sahil is with her, and she will surely get his memory back.Backstage, Bhoomi comes to question why Vaidika danced with Sahil. Vaidika reminds Bhoomi that Sahil is her husband, Bhoomi is the second woman and must recognize what such women are called. Usha comes there to stop Bhoomi from slapping Vaidika.

Vaidika claims she has started over and will get Sahil back from their trap. Ved comes there and says he got his parent’s name in the best parent competition. Bhoomi bends down as Ved comes running forward but he goes into Vaidika’s arms.

Vaidika and Sahil were called on stage for the interview. The compare questions Sahil about Vaidika’s favorite color. Vaidika looks towards Sahil hopefully as he knew. Sahil gets a few flashes of Vaidika wearing Blue. Everyone claps for the correct answer. The next question was about Vaidika’s favorite profession. Sahil closes his eyes, then replies Teacher.

The answer was again correct. Another question was about Vaidika’s strength, Sahil replies it’s her selflessness. Bhoomi and Usha sat curtly while Sahil and Vaidika were considered the best couple. Sahil was given a chance to say a few words for his wife. Sahil looks into Vaidika’s eyes, then says best couples are made by connection of hearts. They stay together through thick and thins. Sahil was emotional and leaves. Vaidika takes the mic and says they are extremely lucky to have each other’s companions.

At Agarwal house, Aarya’s friends sat in the hall. They demand Guddu to sing a song in order to be a part of their group. Guddu says he sings really bad, but can try; he sings ‘Sanam Teri Qasam’. Aarya thinks this is her favorite drama and she wished her ideal sings it in the front of her friends. After the song, Guddu was accepted in the gang. Guddu looks towards Aarya who nods in approval.

Sahil was in the corridor, confused when Usha comes there. She appreciates that he posed to be Sahil very well as the world recognizes him as Sahil Agarwal and unaware of his twin. Sahil asks if she is sure he is Jackie and not Sahil. Being Sahil seems the right thing to him and being Jackie doesn’t.

Vaidika convince the ladies that Sahil’s importance in their life, they must try and defeat the one’s responsible for Sahil’s condition.There, Usha shows Sahil his childhood photos. Sahil had extreme headache and leaves home. Usha calls Bhoomi with an idea.

Guddu and Aarya sat in the café. He tells Aarya if she thinks Jackie is her Sahil Papa then he stands with her. Aarya withdraws her hand as soon as he places his over her hand. Aarya says no boy in her life ever came without some intention, she can’t trust him. Guddu complains if Aarya is inconsiderate about his feelings, his agreement implied he will have to lose Jackie forever but he did everyone because he likes her. He turns to leave the café requesting Aarya not to tell anyone about it at home.

Vaidika and Agarwals were having pooja at morning. Usha comes dancing with the drummer’s band. Usha comes to announce he will marry her son Jackie with Bhoomi within next three days. Bhoomi clutches Jackie’s arms. Usha had brought sweet for Vaidika.

Jackie was confused and wonders why he feels bad for Vaidika if she is nothing to him. Usha says Vaidika is fond of helping others, then what she will do at her son’s wedding? Vaidika replies she will stop this wedding. She can’t let her husband Sahil marry anyone else.

Usha about to slap Vaidika when she holds her hand in midair. Sahil was intrigued and heads forward but was held back by Bhoomi. Vaidika warns to touch her, else she may break this hand. She swears to unveil their filthy plan within next three days. She was silent by now because she felt for Usha having lost her son, but now she can’t bear her trouble Sahil anymore. She says this dummy, silent Sahil isn’t the man who used to be an energetic and full of life son of the house. She vows to bring her Sahil back within next three days. Usha takes the challenge.

In the room, Nani and Bari Amma were worried what Vaidika will do. Vaidika discuss a plan with them which may not stress Sahil’s mind as well.Bhoomi questions Usha why she challenged Vaidika, she is crazy after Sahil. Vaidika comes from behind and warns Bhoomi and Usha tonight will be their last night. Usha blames Bhoomi and youth for not being able to attract Sahil.

It was the engagement party at Agarwal house. A dance performance in which switching the companions was allowed takes place. Sahil and Vaidika end up together in masks. Vaidika now comes to speak to the guests. She says tonight is a special night and a lot will happen with the family. They have prepared a special performance for them. It was a tableau recalling her story with Sahil; there were stage actors while Vaidika narrated the story.

Age is Just a Number 17 September 2020 Update ends as Sahil was intrigued. Bhoomi tries to take Jackie from the hall but he resists and stays there. Vaidika ends the narration on the note how two wicked women made the young man believe he was actually his own twin brother. This is the story of Sahil and Vaidika. Sahil stood frosted as Vaidika held her hand to him