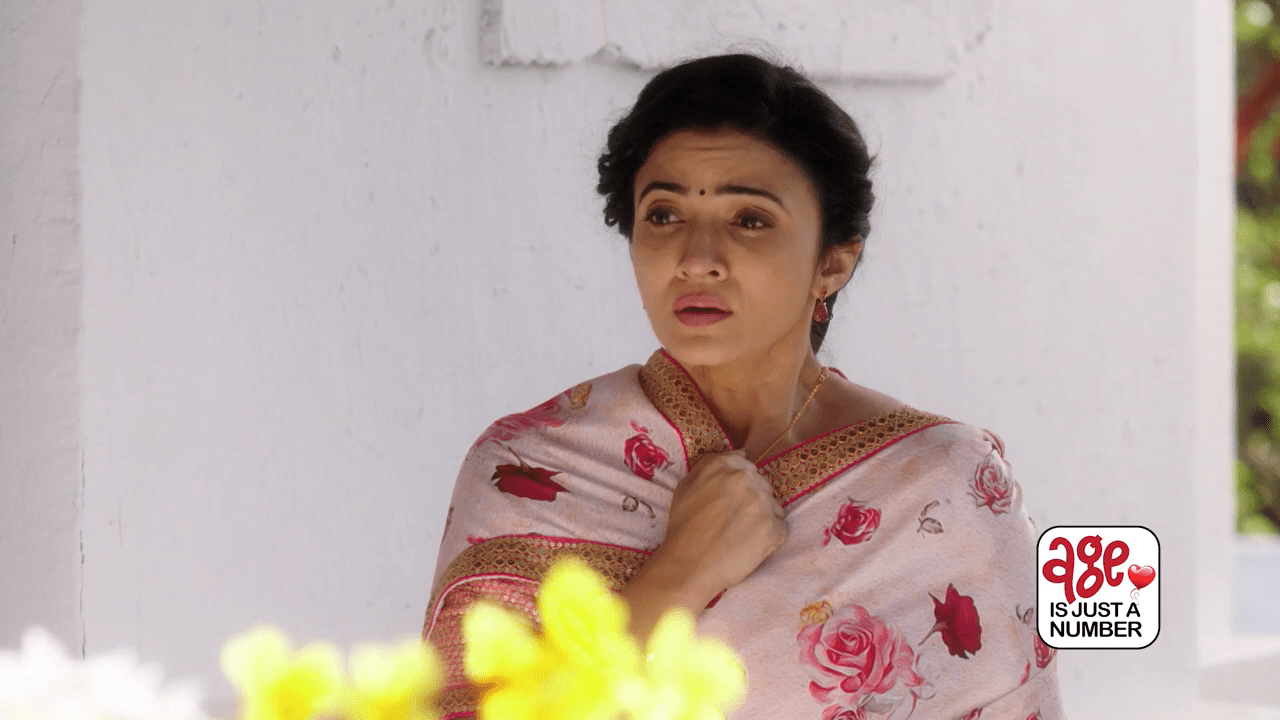 Age is Just a Number 21 September 2020 Update starts as Vaidika was angry and leaves into her room. Sahil tries to stop Vaidika. Sahil tells Aarya that it’s because of Vaidika’s age. He and Aarya belong to same age group and understand what Vaidika doesn’t. He assures that he will speak to Vaidika about it and goes into the room. Vaidika was in the room and curt over Sahil.

Sahil comes in the room and accepts that Vaidika has all the right to scold him, or be mad at him. He holds his ears in apology, then carries a wooden rod to Vaidika allowing her to hit him anywhere but his head. He hits Vaidika at once, pushing her to the bed post. Both look into each other’s eyes, Vaidika’s dress tucked in his shirt. Sahil removes it, then requests Vaidika not to be angry at Aarya and Guddu. They can speak about the matter.

He says he wish to enter New Year happily. He says he really feels a strange connection with Vaidika. Vaidika smiles.In the party, Sahil announces a special performance for the guests. He and Vaidika dances on Mitwa. Everyone claps for the couple. Sahil requests everyone to be seated. He tells Vaidika there is a reason behind all this, and a surprise for her. Maya and her husband stood at the entrance.

Vaidika says it feels they are meeting after years. Maya looked confused and points towards a letter in the bouquet. Her husband says they have to leave within 10 minutes, they have to go somewhere else as well. She gives the bouquet especially to Vaidika. Ved comes to take the bouquet but Vaidika doesn’t give it away. Sahil takes Maya’s husband aside insisting him to stay for a while. Her husband calls Maya as well. Maya thinks only Vaidika can save her from the trouble she is in. Vaidika was worried for Maya, she goes to check for the letter but Ved had already brought it to Sahil. Sahil reads the note, I am in danger.

At home, Raghav beats and harass Maya. He questions if Vaidika can marry someone half of her age, why he can’t marry another girl. He takes off his belt to beat Maya but someone holds the belt from behind. It was Sahil and asks what he wants to prove by physically harassing a weak lady. Maya tells Sahil that since her son was born her husband changed over completely, he is drunk every night. He even took to the party tonight so that Vaidika isn’t suspicious. Sahil clutches Raghav’s collar and says body shaming is a crime in Sahil Agarwal’s dictionary. Raghav carries a wooden rod and beat Sahil badly with it. Mahek stood helpless.

Vaidika comes downstairs looking for Sahil and Maya and her husband.There, Raghav throws Sahil out of the house and takes Maya forcefully with him. Sahil who was badly hurt on his leg tries to stand up. Vaidika reach there and insists on Sahil to come to doctor. Sahil tells Vaidika that Maya’s husband has an extramarital affair and is blaming Maya. He is body shaming Maya now. Vaidika was in a disbelief that Raghav can think so, Maya is a mother of a child and can’t hold a figure of 20 year old. They must save Maya from that man, Maya has done a lot for them both. Sahil looks shocked asking, we both?

Raghav turns the knob of a gas cylinder in the store room where he had tied Maya to a chair. He tells her that within half an hour, as the clock struck 12 there would be a spark from the device and the room will catch fire. Age is Just a Number 21 September 2020 Update

Sahil asks what Maya did for them both. Vaidika instead change the top and says they must go to inform police.Sahil says Raghav is himself in police, they must find Maya by themselves. He sense that Raghav is upto something on New Year.

There, Raghav leaves Maya ready to die on the New Year. Sahil and Vaidika had reached the godown. Vaidika recognizes Maya on the chair with her back at them. The come forward. Vaidika was terrified to see a dummy on the chair instead. She wonders where Raghav would have taken her otherwise.

Vaidika gets a call from Maya, it was Raghav. He says he knew they would reach him. Sahil questions where he is. Raghav says Maya doesn’t has much time, at midnight her body would melt into fire. Maya cries and pleads Vaidika for help. Sahil cautiously looks around.Raghav shows them the cylinder, the gas has spread across the room; it only needs a spark now. Vaidika and Sahil run outside in panic.

Aarya brings Guddu aside and asks why he seems so tensed at New Year. Guddu says he was worried for her mother’s reaction. Aarya assures Guddu that Sahil will handle the situation, she really trusts him. Guddu holds Aarya’s hand and says he wish she trusts him the same way. Aarya says this is why they are going to live together. Aarya says she has a surprise for Guddu which she won’t be able to give in front of everyone. She bends forward to kiss his face. Guddu hugs Aarya.

Raghav leaves Maya as she continue to plead him for her life. Vaidika and Sahil reached the godown. It was two minutes to midnight. Maya shouts at them to leave. Sahil jumps in to turn the cylinder off. Vaidika and Sahil untie Maya’s topes. The lighter had clicked open. The three were left in a shock. Suddenly there was a blast.The reporters ask Raghav how this blast took place. He fakes a cry that his wife was also inside. One of the reporter asks who seems to be behind this.

Vaidika comes from behind and blames that Raghav attempted to kill his wife Maya Avasthi and left the cylinder open. Raghav says he loved his wife dearly, Vaidika is accusing pointlessly. Sahil comes from behind. Raghav was shocked to see Maya. Sahil tells Raghav one of his planning went wrong, they noticed the address behind him in the video call. The journalists now question Maya but she was terrified.

Vaidika tells the press that Maya got fat because of child birth, and this man harassed her and even attempted to kill her. Maya served this man and his family for 20 years, and gave birth through artificial insemination. Sahil says one must always respect women, they give birth to them, worry for them as mothers and sisters as well. The mob of reporters charge over Raghav and takes him to police station.

The press assures Maya behind with her. Maya cries and thanks Vaidika. Vaidika tells Maya to go home, she will be there soon. Vaidika now thanks Sahil for saving her friend fighting his own life. Sahil replies anyone would have done so. Vaidika tells Sahil not everyone does this, he is special. Sahil accepts behind special. He now holds his hand wishing Happy New Year to Vaidika. There was firework in Kanpur.

The next morning, Sahil walks down the road regretting to forget his bike. It was cold and he wish to find a rickshaw. Soon, he hears ringing of anklet. Sahil was afraid and looks around in the buildings. He begins to walk again the hears the voice again. He was stopped frozen, then shouts that his name is Sahil Agarwal, whoever is there must show up. Soon he looks up onto a tree and runs to hold a girl in his arms as she fell off the tree.

The girl straightens up and looks into Sahil’s eyes, then gets off him and takes a wooden rod to beat him. Sahil stops her and asks if she is drunk? The girl says she knows self-defense well, her name is Pankti.

Age is Just a Number 21 September 2020 Update ends as a gang of goons gather around. The girl throws soil into their eyes and run away. The goons catch Sahil and says he always save her. Sahil tries to run away but one of the goons hold a gun saying now Tej Pratab will deal Sahil himself.