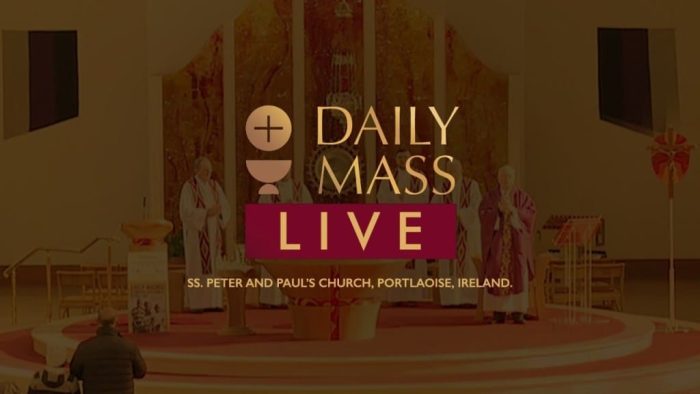 You are watching Live Mass for 19th November 2020 at St. Peter’s and Paul’s Catholic Church, Ireland

Do not let the pandemic prevent you from attending daily Holy Mass. Tune into Shalom World ‘DAILY MASS’ at 10 AM GMT every day to receive the grace and peace of our Lord Jesus.

Reading 1, Revelation 5:1-10
1 I saw that in the right hand of the One sitting on the throne there was a scroll that was written on back and front and was sealed with seven seals.

2 Then I saw a powerful angel who called with a loud voice, ‘Who is worthy to open the scroll and break its seals?’

3 But there was no one, in heaven or on the earth or under the earth, who was able to open the scroll and read it.

4 I wept bitterly because nobody could be found to open the scroll and read it,

5 but one of the elders said to me, ‘Do not weep. Look, the Lion of the tribe of Judah, the Root of David, has triumphed, and so he will open the scroll and its seven seals.’

6 Then I saw, in the middle of the throne with its four living creatures and the circle of the elders, a Lamb standing that seemed to have been sacrificed; it had seven horns, and it had seven eyes, which are the seven Spirits that God has sent out over the whole world.

7 The Lamb came forward to take the scroll from the right hand of the One sitting on the throne,

8 and when he took it, the four living creatures prostrated themselves before him and with them the twenty-four elders; each one of them was holding a harp and had a golden bowl full of incense which are the prayers of the saints.

9 They sang a new hymn: You are worthy to take the scroll and to break its seals, because you were sacrificed, and with your blood you bought people for God of every race, language, people and nation

10 and made them a line of kings and priests for God, to rule the world.

2 Israel shall rejoice in its Maker, the children of Zion delight in their king;

3 they shall dance in praise of his name, play to him on tambourines and harp!

4 For Yahweh loves his people, he will crown the humble with salvation.

5 The faithful exult in glory, shout for joy as they worship him,

6 praising God to the heights with their voices, a two-edged sword in their hands,

9 to execute on them the judgement passed — to the honour of all his faithful.

Gospel, Luke 9:41-44
41 In reply Jesus said, ‘Faithless and perverse generation! How much longer must I be among you and put up with you? Bring your son here.’

42 Even while the boy was coming, the devil threw him to the ground in convulsions. But Jesus rebuked the unclean spirit and cured the boy and gave him back to his father,

43 and everyone was awestruck by the greatness of God. But while everyone was full of admiration for all he did, he said to his disciples,

44 ‘For your part, you must have these words constantly in mind: The Son of man is going to be delivered into the power of men.’