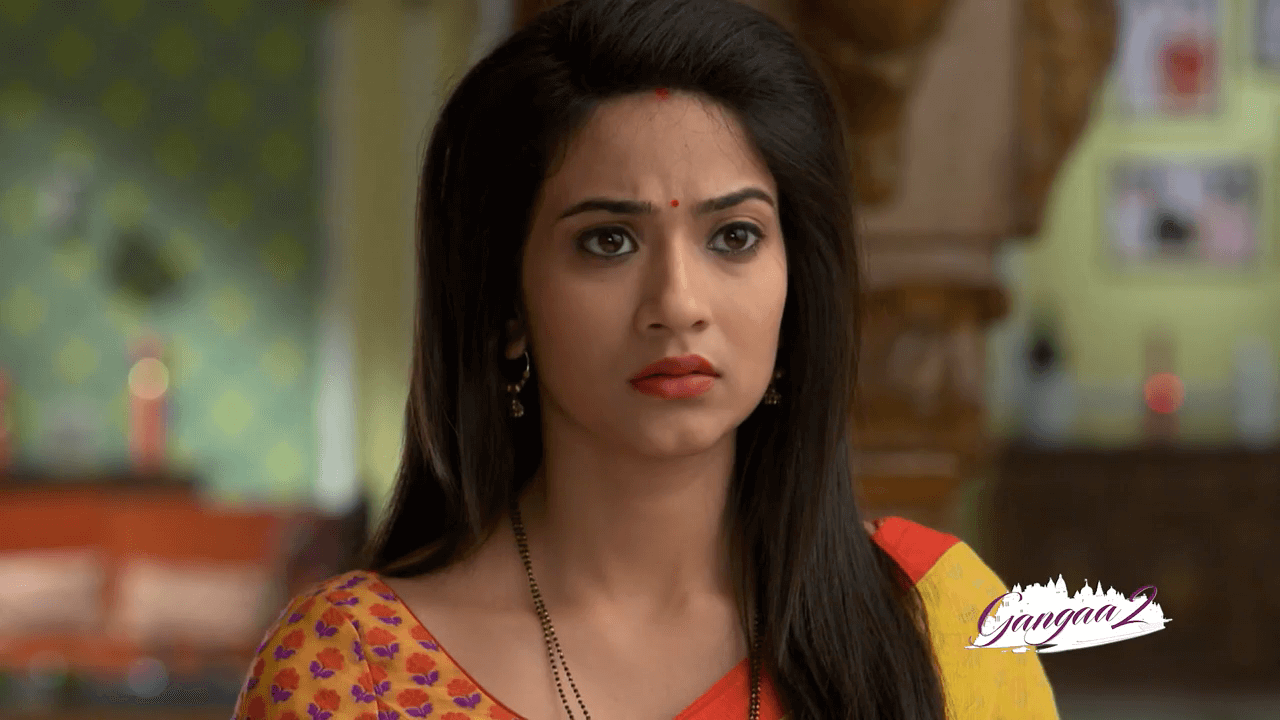 Gangaa 22 November 2020 Update starts as While ammaji and ragini are fast asleep, sagar drives the car, while ganga sits tensedly staring out of the car, blankly. he notices everyone else asleep, and then places his hand on hers, and she is petrified. he asks whats the matter. she says that this isnt right, with them in the car. he says that this isnt wrong, as they are going to be a couple soon. she says that they arent one yet. he stoically turns tensed and says fine.

She is amused at his anger, and says that he is very cute in anger. then she stealthily places her hand on his, and he smiles, as he takes her hand in his. they both smile at each other, lovingly while he takes her hand and kisses. ammaji asks for water in her sleep. ganga finds that the water is empty. ammaji complains of thirst and they drop at a roadside dhaba. ammaji is reluctant to sit in, but sagar assures that its fine.

Ragini is excited and says that when rudra comes, she shall make him meet them all. sagar makes ammaji agree to have food, as they might not have food for a long time now, but she says that she has no faith on the sanctity of these people. ganga then suggests that if not eat, ammaji can atleast have milk. ammaji complies. sagar enquires from the Dhaba owner, and finds that its at a distance.

Ganga asks him to get it, or else ammaji wont have anything, till the entire way. sagar is reluctant, but she makes him agree. then ragini rushes to him, saying that she too shall go, clinging to him. ganga tries to take her away, but she doesnt comply. then ammaji reprimands and asks her to stay back. sagar leaves in the car. it starts raning, and they take shelter in the dhaba. ammaji goes to the wahsroom, and then ganga and ragini take their seats in the dhaba.

While prabha is secretly gorging away on snacks, she gets ammaji’s call, who she asks when would they be returning. ammaji says that they shall reach by evening. then she asks about madhvi, and prabha says that she must be in the kitchen. ammaji asks her to tell them that rudra shall be coming too to get ragini, and that she should keep the bag ready. prabha is inquisitive as to whats in it. ammaji asks her to stick to the work told and not meddle. prabha complies, but is still tensed as to what is mmaji upto.

As ganga and ragini wait, while others leeringly have hard drinks, and eye them, ganga is tensed and upset. then a bar song plays on, and innocently ragini starts dancing, despite much of gang’s attempts trying to stop her. the men are amused, and join in, casting lwed comments and leering signals, at both of them, while the dhaba owner too tells them to back off. but the men continue hovering on, while ganga screams for ammaji. she rushes in and tries to separate the guys, but they push her off. just then, a jeep halts, and someone gets inside and beats the goons to pulp. he identifies himself, as Rudra,

Ragini’s sister, and while the main goon apologises profusely, he makes ragini slaps him tight, and then when he asksganga to do the same, she refuses citing it against her principle. the goons rush away. sagar meanwhile returns, and finding them tensed asks whats the matter. they narrate it to her, while she is aghast. ammaji is tensed, while ragini’s brother and ganga get into a tussle as to how they have a diffrence of opinion in the treatment of goons. rudra comments that she is as headstrong as he last witnessed her.

Sagar and ganga are amused, discussing how good it would be to have rudra and ragini with them. she remembers Santoshi’s warning, and gets tensed. he asks whats the matter that silenced her. she talks about ragini’s attachment to him, and finds her very possessive about him, and comes instantly when she finds her talking to him. he pulls the car abruptly to a halt, and smiles at her, asking if she is jealous. she vehemently denies. but he continues to tease her, by smelling and says that she is actually jealous. she gets emotional, while he asks why is she crying. while denying, she actually breaks down into sobs. he says that he was merely teasing her, and asks her not to get serious. he then cups her face, asking if she is serious, as she is a child, and doesnt even understand the love.

Sagar tells that she has changed as rudra said. but ganga says that she never cries, but the recent happenings make it seem otherwise, and says that she cant afford to lose him yet again. he says thats not possible at all. he then tells ganga that just like the tears reside in her eyes, he shall reside forever there too. he picks up a tear and cups her face, showing it to her. she smiles through her tears, while he says that sagar is very adamant and shall not go anywhere, and asks her to forever keep him in her eyes.she wipes her tears, as he kisses her on the forehead. she smiles at him..

Sagar again teases her that she was looking incredibly cute when she was jealous. Finally, they arrive back home.

Sagar’s father welcomes them all back, and especially rudra, who he heartily invites. he asks the purpose of rudra’s visit. he says that there is an elaborate puja, and hence planned it now, and hence brought ragini too, so that she could have enjoyed with sagar and ganga. supriya asks where is the happy couple. Meanwhile, sagar and ganga too arrive, and are about to step in, when ammaji stops them at the doorstep. all are tensed. she asks them to keep standing here till she returns back. she leaves. all are tensed.

Prabha asks ganga what she did, that they were stopped at the door. ammaji comes with a puja thali, and does their puja, while all are pleasantly surprised, and ganga and sagar are flushing with happiness.

Ammaji then takes their hands. ammaji gathers the family together and informs that she wishes to get ganga and sagar married, as she wouldnt bear them hiding and having their secret love moments. they are overjoyed, while ragini is tensed. ammaji says that they shall find a suitable time and get them married. ammaji asks them to be sent back to her room, after everyone is done with congratulating them. she leaves.

Ammaji gives her the box of jewelleries, while ganga is shocked. all are pleased. ganga asks how is this possible, as they were lent to the money lender. the other widow says that ammaji never gave it to the moneylender, and she just took it from her, and gave it to her to keep them safely, as she couldnt possible have given them away. ganga gets emotional, but ammaji cuts her short, saying that she did what she had to, and then asks them both to leave.

Ganga rushes to ammaji to hug her, while ammaji says that she doesnt wish to cry. she asks them both to leave. they both get overwhelmed, and sagar takes her out. Prabha hears this and is shocked, and comes in after they leave. She expresses in shock to ammaji, that its a great sin that she plans to commit, as ganga is a widow.

Ammaji says that she was a widow, and isnt anymore, but now she shall be a wife, as she was seven years when her husband died, and that she has been carrying the burden unnecessarily, and she faced all the humiliation, but not anymore. she says that now ganga and sagar shall marry, and if that doesnt happen, that would be a crime. prabha complies, saying that she being the eldest, would have taken the right decision. the widow leaves too.

Ammaji finds sagar’s father in the doorway, who had heard everything. he coems in and sits down beside her, saying that he still cant believe, but of all people she is the one who agreed to it, and he is mixed with emotions, as he doesnt know what to feel. she says that what happened in the past few months have forced her to do this, and that ganga loves him, and he too is intensely attached to ganga, and its natural for them to get married. she talks about ganga has always stood as a shield for sagar, even after the way they disrespected and mistreated her, but she kept on being with sagar and wishing his well being, unfazed by what they put her through.

Ammaji says that she understood but always ignored, and says that now finally she tried to take the right path. she says that therefore ganga shall be the rightful bahu for their house, who brings back happiness in their families, hopefully noone casting evil eye on them. he smiles and complies too.

Later, in her room, sagar donss the necklace around ganga, who is very ecstatic to see it. Ragini hurriedly rushes in, and expresses her desire to play but ganga says that she needs to go down for dinner, while sagar pretends to be scared. ganga keeps the necklace back safely. Seeing ganga has a box of jewellery in her hands, and ragini is excited to know about whats in the bag. before ganga can talk about her marriage with sagar, he hastily tells that these are jewelleries for his would be wife. they are called down for dinner. ragini refuses to eat. they say that they shall be back after food. she complies.

Sagar and ganga rush out for dinner, and then he takes her against the stairs, leaning in intimately, while she is nervous. he asks for a kiss to let her go, while she reluctantly complies, mixed with nervous and shyness. as he leans in to kiss her, she turns away shyly. a romantic gaze follows. Their romance is broken off, as they are hollered for dinner. they are amused, as ganga rushes away, while sagar fumes.

Gangaa 22 November 2020 Update – After all disperse, ragini tries on the jewellery. Ragini thinks that if its sagar’s bride, then its rightfully hers only. Prabha overhears this from a distance, and is amused to find that she wishes to be sagar’s bride. she thinks that she got spices just like that and starts thinking as to how now she shall use this pawn, to ensure that ganga never gets married to sagar. The screen freezes on her evil conspiring face