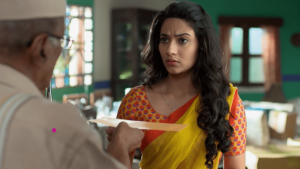 Gangaa 23 January 2020 Update Everyone return home. Ganga notices the sipari on the tree and asks Savitri if she should remove them. Savitri tells a lady, but Ganga happily moves to get it herself. She hands it to Savitri who stood there curt. A servant was taking a pot, and informs Savitri that Pandit asked him to bring Ganga Jal, he must get it from outside. Savitri gives the task to Ganga, and conditions it to be done bare footed. Ganga was sure she can do this.

Shiv was watching over the arrangements with Muneem ji. Pratab comes to ask Shiv bring fuel for generator. Shiv leaves to get the fuel, Pratab sends Muneem ji to bring sweets. He thinks he must get the news to those monks that no one from the family is here. The servant stuffs the pot with leaves and says she must reach home with them before an hour. Ganga follows the servant over the broken path.

Pratab makes a fake call to speak aloud outside the monk’s room; he says no one is in Math except a few people to take care of the arrangements. The monks find the opportunity and gets out of the room. Pratab was hopeful this time Savitri won’t have a complaint with him.

Ganga was walking the path with injured feet. Shiv finds her feet bleeding as she walked over stones and thorns. He asks her to get into the car, Ganga says this is a task by Savitri and she would complete it.

Shiv stops Ganga, and makes her sit near the road. He was concerned about her injured feet and removes the thorns from her foot. Shiv leaves her there to bring a few herbs and apply them onto her feet, while she was crying out of pain. He was sure she would get rest for her feet and tells her to get into the car with him.

Ganga holds the pot and moves forward. Shiv stops her but she insists to accomplish the task given by Savitri. She wasn’t ready to back up from any testimony, she thinks she must win Shiv’s trust again.

The fake monks come in simple clothes to the locker room. Pratab watches over them as she unbolt the window panes of the room. Pratab was alert as he watches Ganga enter there with a pot over her head. She stops the thief and inquires whom he has to meet. The man makes up he came to meet MathaDesh and leaves in a hurry.

Ganga wonders where she has seen this man before. Ganga drops a glass in the way making the thieves alert of her presence. They hide themselves. Ganga places the pot but finds the window panes out of balance. She looks around for a worker and instructs him to fix it all at once; bolting it tightly.

Pratab was curt at Ganga. The thieves whisper what they must do now. The thieves think about looking for the keys which MathaDesh took by himself. Pratab goes to inform Savitri about it. Pratab assures Savitri he would place the keys somewhere they would easily discover.

At night, Shiv comes to take rest and finds Ganga asleep on the floor mattress. His attention goes to her injured feet. He comes to put a herbal ointment over them, then withdraws his hand thinking again. He goes to sleep. Ganga wakes up, wondering he could have applied the medicine. She now puts the medicine by herself.

The thieves reach the house, one of them shows a pipe to climb into the house. They go to look for Shiv who keeps the keys with himself. Pratab moves across the corridor. The thieves watch Ganga and Shiv sleeping in the hall. One of them drop a vase but the other doesn’t let it fall on floor. They move towards a room to look for the keys. The men get cautious as someone open a door, it was Radhika. They follow to stuff her mouth and makes her smell chloroform. Ganga wakes up at once hearing Radhika’s scream.

Ganga follows Radhika’s voice. The thieves make Radhika unconscious and suggests about getting money against this girl’s kidnap now. The find Ganga coming towards the room, then finds a chance to flee. Ganga spots them carrying Radhika downstairs and calls Radhika.

She then walks inside to wake Shiv and everyone, she says Radhika was kidnapped. Savitri questions where they are going. Shiv informs her about Radhika’s complain and head behind Radhika. Ganga holds his hand insisting to come along. Shiv was moved as she held his hand, then informs him about being near the jeep.The thieves plan to hide somewhere and call Shiv for money.

In the car, Ganga asks Shiv what if they have kidnapped Radhika for money. She suggests they must have left the village. The jeep stops by at once, Shiv goes to check for the problem. Radhika wakes up in the car, calling her Maa and Papa. They doesn’t pay attention as she is a minor. Shiv regrets as the wire of car has burnt. Gangaa 23 January 2020 Update on Zee World

Radhika’s car passes behind Ganga, Radhika knocks at the door of the car behind her. Ganga spots the man and recognizes the thief as Math. She shares with Shiv she suspected this man. Shiv was alert and calls Math. He calls Muneem to look for the man in the Math.

Radhika bites the man’s hand and stuffs the driver’s face with her dupatta who suffocated and the car goes out of balance. Shiv and Ganga go looking for Radhika on foot. Ganga tells Shiv to walk ahead, she will walk slowly and insists about it. Shiv wasn’t ready to leave her alone, they try to hire an auto or cab. Shiv stops a car and gets in.

Savitri comes to Math with family.They car of thieves was out of order, one of them deters Radhika and drags her out of the car. Radhika run from their grip into the fields and hide there. Shiv reaches the car and finds it broken. They look around calling Radhika’s name. Shiv makes Ganga sit and calls Radhika across the fields. Radhika replies to his call, but comes to confrontation with the goon. Ganga decides to go on to look for Radhika and finds the goons in front of her.

After a while, Ganga gets conscious and finds herself tied with tree. Radhika had been tied with another tree. The thieves discuss that now Shiv must name his locker after them, else they will kill both of these ladies. They leave the trees. Shiv arrive from behind and whispers at them to run towards the city, then goes to a hiding again as he had already called the police. The thieves come to scolds Radhika for being restless.

Gangaa 23 January 2020 Update ends as Ganga and Radhika’s ropes had been untied. They come together. Shiv places a rod on the thief’s shoulder and beat them, the three attack at Shiv together. Shiv fights well but they beat the back of his head with a rod. Radhika and Ganga move forward with huge wooden sticks, Shiv cheers heading the siren of police van. The inspector takes Shiv and family along to be dropped home. Shiv comes to hug Radhika.