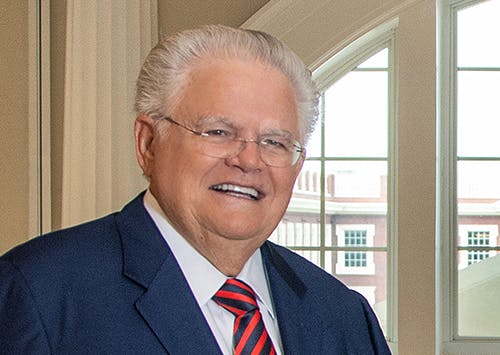 Today’s Scripture: Call to Me, and I will answer you, and show you great and mighty things, which you do not know – Jeremiah 33:3

As Daniel studied the ancient scriptures, he realized that Israel’s time of captivity was drawing to a close. Prophesy foretold that, after seventy years, the captives would be allowed to return to their land.

Daniel began to pray and fast in sackcloth and ashes. Hebrew scholars have timed how long it took him to utter the heartfelt words recorded in Daniel 9. They estimate his prayer lasted a maximum of three minutes.

While he was still speaking, Gabriel came to him in swift flight. The angel informed him that, at the very beginning of his prayer, a command went out, and he was sent to talk to Daniel, because he was “greatly beloved” (Daniel 9:23).

Heaven lies somewhere far beyond the North Star which hangs 2.4 quadrillion miles from earth. Light travels 186,000 miles per second, so the light from that star takes 680 years to reach earth.

In three short minutes, God heard Daniel’s prayer and sent Gabriel to respond! Isaiah 65:24 assures us that: “…before they call, I will answer; and while they are still speaking, I will hear.”

If you are discouraged in your prayer life today, take heart! Like Daniel, you are “greatly beloved.” Continue to draw near to the throne of grace. From the edges of our universe, He will hear and answer.

May the Lord bless you and keep you. May the Lord make His face to shine upon you and be gracious unto you and give you His peace. Pray without ceasing. Whatever you ask in the name of the Father will be done. His answer is on the way!

John Charles Hagee is an American Protestant pastor and televangelist. The founder of John Hagee Ministries, his ministry is telecast to the United States and Canada. Hagee is also the founder and chairman of the Christian-Zionist organization Christians United for Israel.

New Month Prayers For Your Loved Ones October 2022

New Month Prayers For Your Loved Ones October 2022