Lady Luck 1 January 2020 Update starts when Vasundhara hears door knock and goes out of home to check. She sees shawl draped man running behind car and asks to stop. Bhoomi comes down to kitchen to take water and sees door open. She thinks Vasundhara must have gone out and goes to check. Vasundhara asks man to stop, he does and just before he tries to remove his shawl, Bhoomi calls her and she turns. Man escapes.

Vasundhara runs to her room, locks door, and checks newspaper and pics in a box and thinks her 25-year-old problem is haunting her now. She thinks it must be Pavitra and Kaveri’s drama and walks into Kaveri’s room and finds them both there. Kaveri asks why is she here. Vasundhara asks how dare they are to frighten her wearing shawl and following her and says they both are dependent on them and if they continue their dirty tricks, she will kick them out.

Kaveri asks her to mind her tongue and says she does everything openly. Vasundhara asks what about shawl draped man. Kaveri says she did not send anyone. Vasundhara walks out and sees Bhoomi standing outside. Bhoomi thinks who is this masked man who is troubling badi maa.

Kaveri brainwashes Pavitra that Vasundhara ruled over her and shouted everyday 25 years ago and even now she is ruling everyone, but she will break her rule soon. She asks Pavitra to wait and see her plan now.

In the morning, Vasundhara calls pandit home for pooja. Kaveri acting as mad enters and thanks pandit for coming home and asks Latha why did pandit come. Latha says Vasundhaa has kept pooja. She asks if jailer/vasundhara is a big diety. Latha nods yes. She sits in pooja. Pandit asks to show tulsi plant as he has to pour ganga jal on it. Latha takes him out. Kaveri silently changes milk can brought by pandit and signals Pavitra. 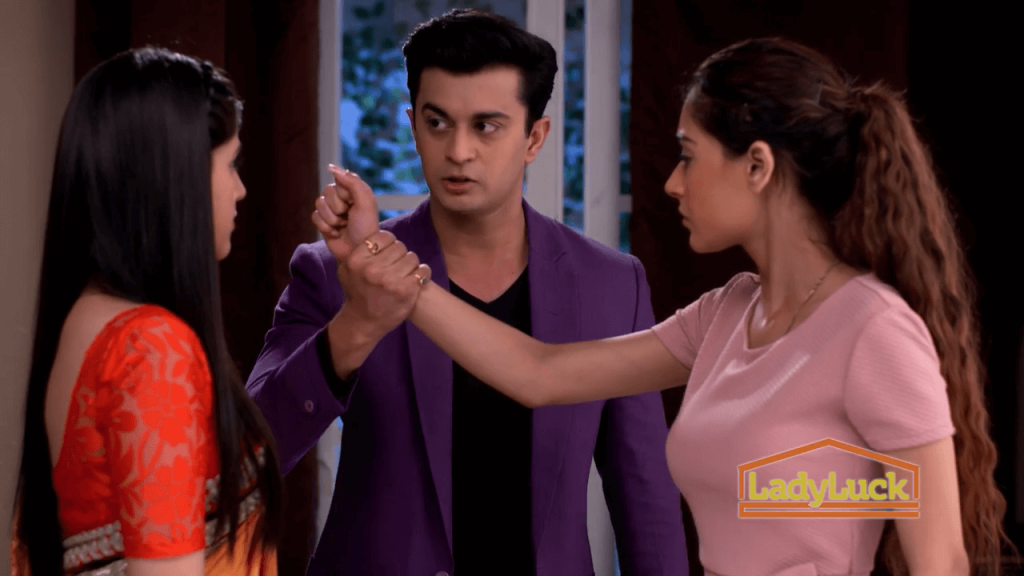 Latha sees oil missing from lamp and gets surprised. Kaveri asks her to get oil from kitchen. Latha walks into ktichen and picks oil. Suman asks why is she taking oil as she has to prepare prasad. Latha says there is no oil in temple, so she is taking it to light lamp. Suman yells that she will prepare prasad with water now. Pavitra silently walks out of kitchen. Kaveri asks pandit to say meaning of shlok and asks latha to sit with her. She apologizes pandit for wasting his time and leaves towards kitchen silently.

Pavitra silently picks lamp and drops oil in front of kitchen door. She enters kitchen and provokes Suman against Latha that she used oil for lamp and did not let her cook. Suman says she will get oil can, walks out and slips on oil. Pavitra smirks, while bhoomi passing by is shocked to see suman falling.

Suman slips and falls on oil. Bhoomi and Pavitra help her and make her sit on sofa. Suman sees oil can next to kitchen oil bottle and asks Latha why she wants to kill her. Latha asks what did she do. Vasundhara asks Suman to speak. Suman says she dropped oil in front of kitchen door purposefully to make her fall and break her head. She continues shouting at Latha. Vasundhara asks her to stop alleging Latha without any proof and asks Bhoomi to take Suman to her room and apply medicine.

Latha says Vasundhara that she did not do anything. Vasundhara says she knows she would not have done it purposefully and asks to be careful heron. She asks her to start pooja now. Pandit performs pooja. Bhoomi takes pandit’s blessings.

Bhoomi hears Vasundhara speaking over phone and canceling meeting and says she looks very tensed and if wants, she can tell her problem to her. Vasundhara says each day Latha and Suman’s fights are increasing and she is afraid that when she returns from office, she will see this house broken. Bhoomi asks her to trust her, she will not let Suman and Latha meet and will not let them fight.

Vasundhara comes out of house and sees shawl draped man in car. She shouts to stop and calls Latha and Bhoomi. Bhoomi comes and sees man running from car and follows him. Latha also comes out and asks her what happened. Bhoomi comes back and says man escaped. Latha asks Bhoomi to take Vasundhara to her room and give her medicine. Bhoomi takes Vasundhara with her.

Bhoomi takes Vasundhara to her room. Latha brings medicine. Bhoomi asks Latha to go and rest as she must be tired. Latha leaves. Vasundhara reminisces shawl man and asks Bhoomi to go as she wants to rest. Bhoomi says okay and leaves. She goes outside and asks driver where was he when shawl man came. He says he got a call, so went out to attend it. She asks whose call it was. He says it was a blank call. Bhoomi thinks shawl man is related to badi maa’s past and she will find out who he is.

Suman writhes in pain in her room. Servant keeps oil for massage and leaves. Pavitra enters and says she will massage her leg. Suman says she does not need her help. Pavitra says whole family is arrogant, she is sitting her yelling and Latha sitting sadly in her room. She starts brainwashing her that everyone were living so happily when she came in, but later realized that everyone are jealous of each other and continues that just like Latha threw her out like a fly from milk, she threw even her and Kaveri out many years ago. She asks Latha made her alone, etc.etc..

Bhoomi says she will not tolerate anyone breaking her house and says she gave her many chances to change herself, but is not and instead spreading her poison in every family member. Pavitra says she gives good lecture and asks her to join some school.

Bhoomi says she is ashamed of to call her nanad and says animals are better than her. Pavitra angrily tries to slap Bhoomi, but Ansh holds her hand on time and warns her not to ever even look at his wife, else she will repent.

Lady Luck 1 January 2020 Update ends when Bhoomi warns her to mend her ways and if she continues her dirty tricks, she will not let her succeed in he dirty plans. Pavitra leaves angrily. She then massages Suman’s legs. Ansh locks door from inside. Pavitra thinks Bhoomi is proud to call herself as Ansh’s wife, she will break her and Ansh’s relationship soon