Mehek 13 August 2019 Update – In morning, Kanta is looking for network on phone and says dont know whats the matter. She asks Mohit to check her phone, he doesbut Jeevan hints him to not call. Jeevan comes to him and whispers that your mom’s phone is fine but her mind is not working, Mahek didnt call her and she is worried. 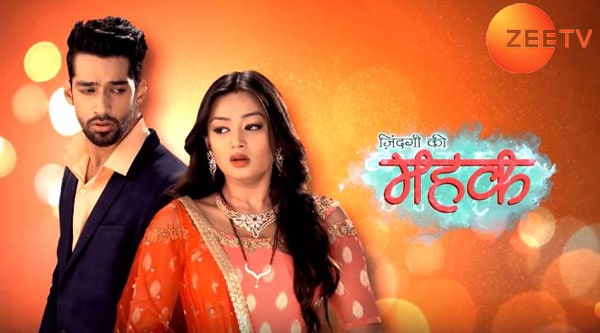 Mohit says but Mahek is on honeymoon. Jeevan says Kanta doesnt understand that, they want privacy but Kanta wants Mahek to call daily. Kanta’s phone rings. Kanta takes it and says its Karona’s call. She takes call. Karona asks if Shaurya or Mahek called her? Kanta says no they are careless. Harish says to Karona that I will book ticket for you to spoil their honeymoon.

Kanta says if I get call then I will inform you, you do same, she ends call. Karona asks Harish to not taunt me like this, mother’s heart cant have peace till she doesnt hear son’s voice, let me call Shaurya. Harish says no way, lets watch a movie darling, he takes her.

PD says to Kanta that they are enjoying their time together but you cant get that? Kanta says I am feeling restless thats why worried. Mehek 13 August 2019 Update

Shaurya and Mahek are walking around lake. Mahek says I dont know swimming, I wont go. Shaurya says I wont be alone on my honeymoon. Mahek says I wont do any adventure. Shaurya pulls her closer and says dont do drama, you can hug me tightly if you are scared. Mahek says if I get drowed in this water then I will become ghost and torture you. Shaurya says lets go boating. Mahek finds Sahil guy there. She says its same guy who was fighting with that girl. Shaurya meets Sahil. Sahil introduces himself and his Trisha. Mahek is tensed. Shaurya says my wife is worried about drowning, Trisha says you wont drown with life jacket.

Sahil’s ex-girlfriend gives money to boating crew and says you have to drown Sahil and his fiance today in boat even if they are wearing life jackets, he says your work will be done.

Mahek doesnt want to go but Shaurya makes her wear life jacket and makes her sit in boat. They start peddling. Mahek keeps praying for safety. Shaurya says we use cars, trains and buses but its time to work on boat, relax baby, I am here. Mahek says dont try to relaxme, I will deal with you later. Shaurya sprinkles water on her and laugh.

Sahil’s ex-girlfriend is near shore and sees Sahil and his fiance enjoying in boat in which Shaurya and Mahek are too. She calls boat guide and ask him to drown boat. Boat guide jump in lake and turns boat upside down, all drown in water. Everyone knows to swim. Mahek is drowning and asks Shaurya to help.

One baba comes there, she gets scared seeing him. He says this will happen again, this is just start, your life is in danger and nobody is going to save you, who have come will leave too, Mahek shouts for Shaurya, baba glares at her and leaves. Shaurya comes to Mahek and asks what happened? Mahek winces in pain. Shaurya sees Mahek’s foot bleeding and says lets go from here. Shaurya brings Mahek to resort and shouts for security, he asks Mahek if she is hurt? she says I am fine. Manager comes there.

Shaurya says see my wife is hurt, call doctor here right here, boating staff was fake, I will send them to jail, call doctor here soon, manager says it will take time, Shaurya shouts him to bring doctor here, I dont want to hear anything else. Mahek says I am fine. Mahek recalls Baba’s words that her life is danger and nobody is going to save her.

Shaurya says to manager that I want doctor here right now, I want to send criminals to jail. He says to Mahek that I am sorry, she says I am fine. Shaurya takes first aid kit and wipes her wound, Mahek winces in pain, Shaurya is pained to see her and says I am sorry, you asked me to not go there but I didnt listen to it. Mehek 13 August 2019 Update – Zee World

Mahek says dont keep blaming yourself for everything, you do so much for me, its a small wound and will heal soon, I am more pained to see this state of yours, you are more doubtful because of what Ajay and Nikki did, nobody tried to kill me, Shaurya kisses her hand and says I feel pained when I see you in pain. Mahek says it happens when love increases too much, it cant be seen so we cant heal it. shaurya says I am scared to lose you.

Mahek recalls baba’s words that she is in danger, she gets tensed and says I am yours Shaurya and I will stay with you, you will always feel me closer even if I go away, I love you, he says love you too, she says dress my wound then we will go shopping, he nods and bandages her wound, he sadly looks at her, Mahek hugs him tightly.

Shaurya and Mahek are in market and shopping. Shaurya is taking Mahek’s pictures. Mahek gets Kanta’s call, Kanta asks how is she, she says I am fine, I am shopping for you. Kant puts phone on speaker. Kanta asks if she is fine? Mahek whispers to shaurya if he told family about accident? Shaurya says no. Kanta and everyone hears accident, Karona asks which accident? Mahek says to Shaurya that I did mistake, I told them about accident.

Shaurya takes phone and says dont worry Kanta chachi, it was small accident as we went for adventure, I couldnt take care of your daughter but I am sorry and will take care of her. Kanta says comeback, we are worried. Karona says yes we want you both infront of our eyes, please comeback, sorry, you can go again later. Sonal takes call.

Mahek takes call, Sonal says both moms are worried, you can come if you want, Mahek says okay we will come tomorrow, she ends call. Shaurya is miffed that they are leaving tomorrow. Mahek says all are worried and we will get another chance. Shaurya says okay but tonight you will remain infront of my eyes, I will make tonight special.

Sahil says to his ex-girlfriend that you are wrong Prachi, I have gone away from you, you did wrong today, he leaves. Prachi says he cant go away from me. Shaurya buys cotton candy for Mahek, she hugs him. He buys bangles and earrings for her. She makes him eat gol gappas. Mahek and Shaurya enjoy shopping.

Mehek 13 August 2019 Update – Shaurya and Mahek comes to resort, he smiles at her and says you are first wife that doesnt want to be with husband on honeymoon but want to go back to drink tea with family, Mahek says all are worried there, we can always comeback as resort is ours now. Shaurya says I have loved a weird girl.

Mahek thanks Shaurya for bringing her here, she says I love you so much, he says but I love you way more, she says no I love you to infinity, they smile at each other. shaurya stops her and hugs her. Mahek hugs him tightly, hawain plays. Shaurya gets call and doesnt get sginal, he moves away from Mahek. Mahek starts looking around hill.

Kanta and Karona does pooja for peace of kids. Priest says everything will be good. Karona says we will do this pooja once a year. kanta says they dont understand, they should comeback only then I will get peace, they leave but diya of mandir blows off hinting something wrong is going to happen.

Mahek is walking on bridge. Prachi comes there with cart, she says baby I love you, I told you that I love you most but you didnt believe me, baby you should have understood me. Mahek sees Sahil’s ex-girlfriend putting unconscious Sahil on walk through bridge. She puts Sahil in a bag and throws him over bridge in lake. Mahek screams seeing it. Ex-girlfriend turns to see here there. Mahek says you killed him? Shaurya is on call away from bridge.

Prachi glares at Mahek. Mahek says you killed him, you will go to jail, I will tell everyone. Prachi says you shouldnt interfere in others’ matters, she moves towards Mahek. Mahek screams for Shaurya, she sees Shaurya away busy on call. She screams for him. Prachi takes a wooden stick from cart and hits Mahek on head. Mahek’s head bleeds, she tries to call out to Shaurya but he doesnt listen, Mahek faints.

Prachi smirks and sees Shaurya not looking at Mahek. She pulls Mahek up, Mahek is dizzy, prachi says you wanted to send me jail? she drags her to bridge corner and throws her in lake. Shaurya turns at exact moment and is shocked to see Mahek fallen in lake. Mehek 13 August 2019 Update

Prachi throws Mahek in lake. Shaurya turns and sees Mahek drowning in lake. He runs to bridge and shouts for Mahek. Prachi says oh my God, she is your wife? dont jump, water is flowing too fast, she wanted to take selfie on bridge and fell down, she slipped and fell. Shaurya sees Mahek drowning in water, he shouts for help. Prachi says I will call police, she leaves.

He is shocked to see her dead. He recalls how Mahek said that she will always be with him and even if go away, then he will feel her near him. Shaurya screams and hugs her body. He asks her to wake up.. he cries and caresses her face. Prachi tries to control him. Shaurya kisses Mahek’s hand. Kanta calls Shaurya. He takes call. Kanta hears everything and drops phone in shock, she faints hearing about Mahek.