Mandhar takes Neev home. He is crying. Mandhar says if he goes out I will hit him too bad. Julie says he won’t go please don’t hit him. Mandhar goes somewhere.
Mahak makes shaurya tea. He says what happened Mahek. She says close your eyes and rest. He says what if you go? She says I wont. He holds her hand and says why didn’t you run when you could? Mahek sees his blood in her hairline.

Archie says to Mandhr there is a plan but you have to do something. He says I can do anything. Archie pours wine. He says you have to do one thing that will make things go in your way. There is no way of going out. He says i don’t give up.

Mahek wakes up next morning. Shaurya is asleep. Mandhar comes home. He says when will ma come? Mandhar says come let me take you to mom. Julie says where are you going? He says I am going to bring his mom back.

Mahek sees her photo with Shayra and her head hurts. Neev says I won’t go with ma.
Mandhar puts oil on neev. He says I will burn him to bring Mahek back. Neev says papa please dn’t kill me. Julie says leave him please don’t do this. He locks julie and takes Neev with him.

Jeevan and everyone see Mandhar on TV. Karuna and Dolly see it too. Mandhar is going to burn Mahek. Mahek faints. Shaurya sees her. He says what happened are you okay? She says I am suffocating. Shaurya takes her to hospital.

Police comes. Mandhar says if someone comes near I will burn myself and him. No one come near me or you will get burned too. Police ask him to stop. He says bring my wife back that Shaurya kidnapped. You police can’t do anything. We were doing wedding and Shaurya took my wife. Police says we will investigate but leave the child. Kaaruna says leave the child. He says what should Id o. Media is reporting against Shaurya. People are protesting. Police everywhere looks for Shaurya. 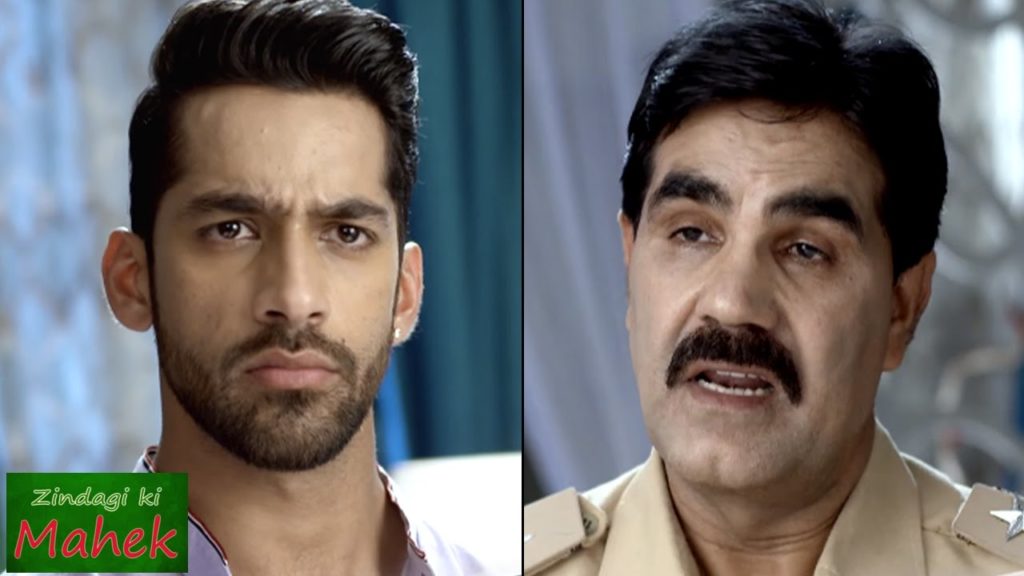 Kanta says let me go we can save the child we know them. Police lets them go. Mandhar says Shaurya relatives came. They will say he didn’t do anything. Mandhar says if Mahek doesn’t come in fifteen minutes we will kill ourselves. He says only ten minutes are left. Shauray is taking Mahek to hospital. He goes to hospital. When he comes back to car Mahek isn’t there.

Mandhr says we will burn in a few minutes. Neev is crying. Shaurya looks for Mahek. He gets the video on his phone. Mandhar says your time is over. We will burn our selves. Mahek comes and says Neev. She hugs Neev. Mahek says neev no one will har you. She throws the fire away. Shaurya comes there.

Mahek slaps Shaurya and says because of your madness I would have lost my son. You almost killed me in that one hour. She ran from the car. Shaurya says you pretended? Shaurya says I had nothing to do with all this. Mahek says if anything happens to my son I will kill you. My name is Vandana and stay away from me.
Police arrests Shaurya. Mahek says I hate you and don’t ever come back to my life. Police arrests and takes Shaurya. Mahek hugs Neev.

Archie and Karuna are in jail. Archie gives Karuna water. Karuna says he doesn’t think that she is someone’s wife. Shaurya says I did this crime alone and my family was not involved. Let them go. Inspector says you have to stay here tonight. Can only bail you tomorrow. Mehek 26 August 2019 Update on Zee World

Doctor checks neev. Mahek hugs him. She says Neev maa is here for you. Neev opens eyes. He says ma where were you? I was so scared. Mahek hugs him. Mandhar goes somewhere. Julie says where are you going now? You are worse than an animal. Who does this to their kids. Mandhar shoves her. He says you dont’ care about me? I did this so I could bring her back. We have to keep her in our hands. So I will go to jail you will too. Neev will go to orphanage and dad will die.

Mandhar says now you care for him? Why you sent Shaurya photoo? mahek says don’t be mad at me after what you did with your son. How could you do this to your son. Julie says if you care for Neev why you went with him? Where were you all night? You spent a night with him. Be gratefful that we even let you in. Mahek says my husband should have protected me. Julie says you only came back after mandhar did all this. We are going back and if you don’t wanna come you can stay here. Neev hugs Mahek.

Shaurya recalls what Mahek said. Archie comes there. She says i am here with you always. Shayrya says leave me alone for now.
Julie says pack up. We are going from here. She asks Mahek to tell her decision by morning.

Kanta comes to meet Shaurya. She says I borught you halwa. We can’t give up. Mahek is going tomorrow. Do something. We have to stop her. Archie says she is not Mahek. She is vandana.

Shaurya says Archie is right. She isn’t Mahek. Kanta says how can you give up? Archie says why are you forcing him to fight for a woman who isn’t Mahek just because you think she is Mahek. Kanta says you stay quite. SHe says to Shaurya once she goes from here she will believe forever she isn’t mahek. We will lose her. Shaurya sits down in distress. Archie says only come back here when you don’t wanna prove that girl Mahek. Archie says in heart Shaurya will be mine forever.

Mahek is walking towards the car. Mandhar says sit in the car with Neev. Vicky bails Shaurya out. Mandhar and Julie sit in the car as well. Police comes there. They arrest Mandhar. Inspector says for spreading turmoil and forcing a child to suicide. Mandhar says I will call media again. That Shaurya has paid you.

Shaurya’s manager comes and says its done. You know what to do next.

Police arrests Mandhar. Julie comes and says my son didn’t doo anything. Mandhar says to Mahek you did this with Shaurya so you can go to him. Julie says you have ruined our house. You are going with that shaurya and planned all that. Mahek says don’t accuse me of that. My family is the most important to me.

Archie sits next to Shaurya. She says you look better now. you have accepted the reality. You are free of the illusion that Vandana is Mahek. She says you tension worried me. Shaurya says excuse me and leaves. Archie says where are you going? He says for work. I want to focus on work. She syas lets make space for new things in business. She says wear this coat it will suit you. He wears the other one and ignores her.

Jevan comes and tells everyone that Mandhar was arrested. He says to Kanta do you know anything about it? She says no but he deserved it.

Vicky brings the inspector to Shaurya. He says I am looking after Mandhar’s case.
Later that inspector comes to Mandhar and beats him. He says how dare you harm a child and do all that drama. He and constables beat Mandhar. He sends the video to Shaurya. Shaurya talks to Maandhar and says how are you? You tried to kill a child? now see what I do. Mehek 26 August 2019 Update on Zee World

Someone knocks on the door. Mahek opens the door. Its Mandhar. Julie says thank God they left you. He screams. He says my whole body is bruised. Mahek says let me bring warm water. Julie does his bandage.

Next morning, Mandhar is asleep. Police comes again. He says is he better now? We have to arrest him again. Mandhar says why you left me then? Inspector says have to serve you. Mahek says please stop. Police takes him. Mahek comes to police station. She says take all this money and leave him. Inspector says don’t bribe us.

Julie says to Mahek you did all this. Mahek says he kidnapped me and you all couldn’t do anything. And then he used my son. I promise you I will get him out of here in 24 hours.

Mahek tries to hire a lawyer but no one takes her case. Shaurya and vicky are making sure no one takes her case. Kanta says you are Mahek. You slapped the shaurya who helped your family. Did he harm you no? Why were not happy marrying Mandhar again? Why were you not happy? You know Mandhar is fooling you. He isn’t your husband. You know that it was not Shaurya’a Mahek.  Mahek says for now please help me.

Mehek 26 August 2019 Update – Shaurya calls Ravi and tells him something. Ravi says only Khuraana can take this case. Mahek comes to Khurana. Khurana says I will only take this case if Shaurya agrees. mahek comes to Shaurya. Neev says please help us hero. Please help my mom. Julie says please help us. Karuna says you people stay away from us. Shaurya says you slapped me and said you don’t wanna see my face. Why would I help such people?