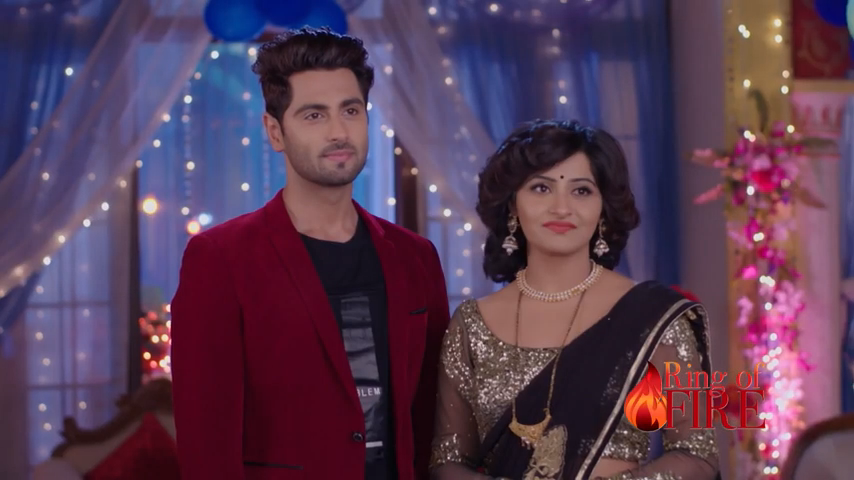 Today’s episode starts as Anurag tells Shristi that whatever Ragini saw was her imagination, he loves only Ragini and no one else. Shristi says he has to explain that to Ragini and open closed door of Ragini’s heart. Anurag thanks her for guiding him. Shristi asks him not to waste time in thanking her and asks to go and bring her jethani Ragini.

Vidhvan feels bad for Ragini and tells Revathi how can Anurag do this to Ragini, Ragini is short tempered, but what happened in Udaipur that Ragini took such a drastic step. He asks Revathi that she was with them, what happened there. Revathi reminisces brainwashing Ragini to continue acting as Sangini and rest of the incident. She thinks whether to inform him everything.

Dulari walks in and stops Revathi and says bua herself is mentally disturbed, what will she say. Vidhvan says she is right and leaves. Revathi tells she wanted Anurag and Ragini separate and should be happy, but she is feeling bad.

Dulari asks not to feel guilty, she did right.Anurag walks into Vikral’s house, but guards stop him. He says don’t they know he is this house’s damad. They say they know, but thakur saheb ordered not to let him in. Anurag starts arguing. Vikral walks in and asks what is he doing here. He says he is his damad. Vikral says he was until he hurt his daughter’s feelings, he is tolerating him till now as he is Vidhvan’s son. Anurag asks nothing else? Guards catch him, and he resists.

Ragini walks in and asks to leave him, asks why did he come here. Anurag says he will convince her and take her home. Ragini says everything is finished now and walks away. Anurag continues resisting. Vikral warns him to leave and not show manjnu drama.

Anurag continues resisting and runs around. Vikral pulls gun and says he will not hesitate to shoot him for making his daughter cry, Anurag is proud of being London educated, but he did not value his daughter, his daughter is a diamond which he did not understand. Anurag says if he goes from here, he will never return and leaves telling Ragini he is going. Ragini stands silently.

Shristi looks at Shristi’s gifts and cries. Hamari Adhuri kahani. She cries seeing their photo together and remnisces asking Vishu to get it printed. Vishu say he is proud of her. She looks at his news in newspaper and says she is proud to be his wife, nobody can be as innocent as him in this world, I love you. She continues crying while Hamari adhuri Kahani continues playing in the background. She holds his clothes and imagines dancing with him.

Anurag and Ragini reminsce each other. Tu Roke Na Ruke Naina..song… plays in the background. They both reminisce time spent with each other. Vikral feeds Ragini. Ragini says she is full now and ate because of his insistence. Vikral says now he is going to wipe her tears forever. She asks what he is going to do. Servant comes and says work is done. Vikral asks Ragini to trust her babuji. Ragini asks where is he going. He says to get back her happiness and leaves.

Vidhvan scolds Anurag to tell what had happened during Udaipur trip as issue is between 2 families now. Vikral walks in. Shristi touches his feet and asks if Ragini did not come with him. Vikral says no and says this is not a situation, but he has to do it. Vidhvan asks what he wants to do. Vikral says he came to give invitation to them. Vidhvan asks what type of invitation.

Vikral walks to Anurag and giving him sweets asks to sweeten his mouth, he is over proud about his education and does not consider his daughter of his caliber as she does not know English. He gives wedding card and says its Ragini’s wedding, he will find a better boy for Ragini in 30 days and they all have to attend wedding.Ragini asks her mother Vani where did babuji go.

Vani says when did he inform and go, he does what he likes, she should go and relax in room while she goes and perform pooja with neighbor women. Neighbor women come and ask Ragini whendid she come, they heard she went to honeymoon to Udaipur recently. Vani scolds them if they have gone mad, Vidhvan’s son is dead. Other woman says son died and another babu returned to her maika, if she fought and came to her maika.

Vani says nothing like that. Ragini gets angry and tries to confront, but she gets Shristi’s call and moves aside. Ring of Fire 21st March 2021 Update

She picks call and apologizes Shristi for leaving her alone. Shristi says that is okay, she knows Ragini cares for her and is tensed now, she knows whatever Ragini did is in anger and her anger is valid, she blames herself for suggesting her to act as Sangini. Ragini says because of it, she could realize Anurag’s real face.

Shristi says she did not think Ragini would take such a big step of remarrying. Ragini asks why will she. Shristi says chachaji gave wedding card and told told wedding is after 30 days. Ragini says she will not remarry, she will call her later.

Ragini packs her bags and walks down. Vikral asks where is she going. Ragini says she does not know, but she realized this house does not have place for her, ammaji is right, girl does not have her own house.

She is fool to consider her house wherever she goes, she considers her in-laws’ house as her house and when she came here, she realized she became burden to him. Vikral asks from when she became burden to him, she is her pride. Ragini asks why did he go with sweets to congratulate her in-laws. Vani asks what did he do. Ragini says babuji wants her to get married and even printed card. She thought her babuji is different who thinks girl’s house is her sasural.

Vani asks why is he trying to break relationship instead of refixing it. Vikral says he will speak to her later and asks Ragini to tell specifically if she wants to return to Anurag. Ragini reminisces Anuag kissing Sangini and calling her Sagini. She says she will not return to misterji.

Ring of Fire 21st March 2021 Update ends as Vikral says when she does not want to stay with Anuraag, she should move ahead in life with a trustable life partner. He says only jeweler can identify diamond and he will get a jeweler for her who will identify her good qualities. Ragini agrees for remarriage.