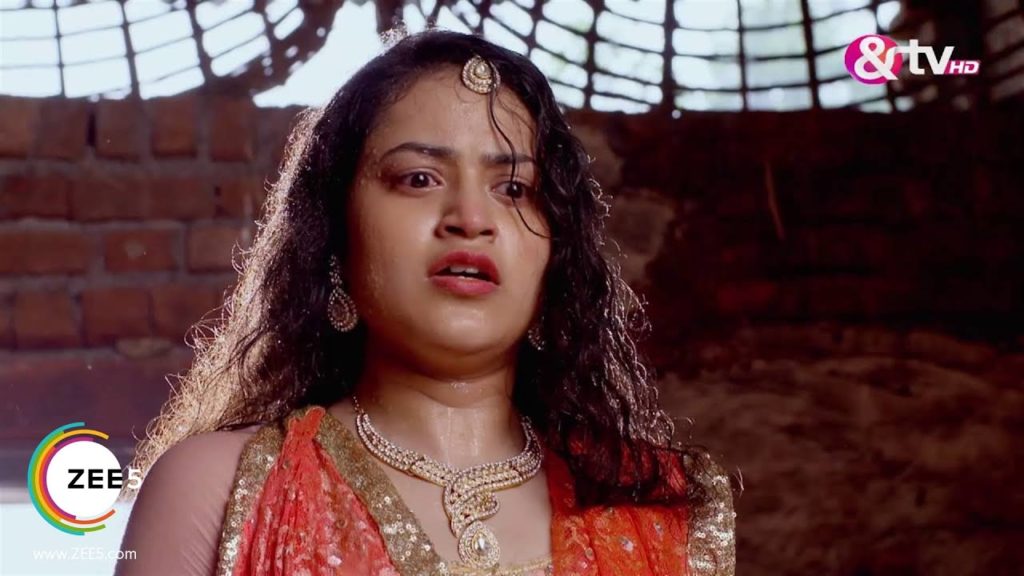 The Heir 21 August 2019 Update – Sushila looking for Mannu. Mannu collides with Jai and hides. Sushila asks Jai about Mannu. Jai asks who Mannu. Sushila says he is eight year kid. Mannu signs no. Jai says no, I did not see anyone. She asks what are you doing here, did you impress Amba or not. He says Amba has got hidden and asked me to find her, help me. She asks why will I give you money then, do your work on own. She goes.

Mannu argues with Jai. Jai says I don’t keep money for free, take this jewelry back, I will take money after I do work, where are you going now. Mannu says its family matter, you won’t get money, you won’t do any work without money. Jai says Sukhi told me Raavi is in problem. Mannu asks will you help. Jai says no, mabe if you say your partner, he can help. Mannu asks partner, will youhelp. They smile and join hands.

Jai, Mannu and Raavi scare doctor. Doctor asks what do you want. Mannu says just tell them that you gave injection to Raavi. Doctor agrees. Raavi thanks Mannu and apologizes. Mannu says you are my family, I can do anything for you. Raavi says I realized this today, my mummy and husband got against me and my baby, the woman who can kill my mum in law, she can kill my baby anytime. Mannu asks did you know this. Raavi says mummy told this to me yesterday night in sleep. She asks Mannu how do you know him. Mannu says I got Jai, he will act to marry Amba, she will be with me always. Raavi asks are you Preet. Mannu says yes.

Jai asks Raavi can she tell this in police station. Raavi says yes, I will give statement. Doctor tells Jagan and Sushila that he has given injection and Raavi will lose the child. Raavi comes. Sushila thinks Raavi is not crying, what happened to her, there is something fishy.

Mannu talks to Jai. He says I fooled doctor. Amba comes to them. Jai says I have found you, this was my plan, you will come to me yourself. Amba goes. Mannu holds head. Jai says its happening because of you. Sushila holds doctor’s neck and asks did he abort Raavi’s child or not. Doctor says I will tell you, forgive me, I did big mistake, I lied to you, I did not abort Raavi’s child, Mannu asked me to do this. She says Mannu. He says yes, there was someone with Mannu. Sushila says Mannu started spoiling my work, I will see how Mannu gets saved.

Amba sits annoyed with Jai. Raavi comes to her. Amba asks are you fine. Raavi says I want to talk to you. Jai and Mannu come. Raavi says I came to apologize from Jai’s side. Amba says no need to apologize. Raavi says they both were helping me, else I would have lost my daughter….. Jai could not find you. Mannu asks Amba to give another chance to Jai. Amba says I have forgiven Jai.

Amba holds Mannu and smiles. Jai praises Mannu. Mannu says we have to go police, so that Raavi gives statement against Sushila. Raavi cries and says I never thought I will have to do this against my mum. Mannu says if you don’t do this, you will lose your daughter.

Raavi says come Mannu. Sushila comes to them. She asks where are you going Raavi, doctor asked you to rest, I will take you to room. She drags Raavi.

She says I know your truth, you did not abort the child, Mannu came there. Raavi sees Mannu. Mannu signs her to say. Raavi says Mannu has come, but don’t know how. Sushila asks who was that other man with Mannu. Mannu thinks if Sushila knows Jai was with me, she will know Mannu and Preet are same.

Raavi is swearing and saying I don’t know that other man, leave my daughter. Sushila asks did you think daughter’s name. Raavi cries and says I m your daughter, you don’t do this. Sushila says yes, I will think something, let me think. Mannu looks on. Sushila says I have seen the girl, she said if she is alive, I will die, and I can’t take risk, I will do one thing, whatever you know, hide the truth, don’t think of giving statement, I will hide this child truth from Jagan, Jagan thinks you got abortion done, you decide now, we can hide each other’s truth. Raavi agrees and cries.

Mannu looks on. Sushila asks Raavi to stop crying now. Mannu goes. Sushila smiles. Mannu packs the bag. Jai comes. Mannu says Amba’s state is same, I could not help Raavi and get clue against Sushila, I lost. Jai asks what happened, tell me. Mannu tells everything. Mannu says Amba and I always did things in favor of girls, Amba got permission for Simran’s higher education, she has saved me from everyone’s sight since 7 years and…. she taught me to respect women, if a girl died because of me, everything would have got ruined, no I can’t let this happen.

Jai wipes his tears and says you are great, and mature, I can understand your mother is very great. He pacifies Mannu. Mannu says Bheeru has proof that Sushila has killed Bebe. Jai gets the pic and asks is this your uncle. Mannu asks where did you get this. Jai thinks to tell truth when right time comes. He says I got pic from Amba’s room, I will go and come back with proof. Mannu hugs him. Jai says enough, hug me when I do work, don’t trouble Amba. He goes. Sushila sees him and is with courier guy. She gets angry and calls police, informing about Mannu.

Jai meets doctor and asks about Bheeru. Doctor says he is in coma. Jai asks about the belongings. Doctor says its in drawer. Jai gets CD and apologizes to Bheeru for the accident. He goes.

Amba talks to Mannu. Amba says Bheeru is eight year old. Mannu says see carefully, this is Bheeru, think. Mannu says this is Bheeru. Sushila comes there and says Mannu, you met after a long time. Amba looks on. Mannu hears police siren and worries. Mannu gets an idea and smiles. Sushila asks why are you smiling.

Mannu says when you know I m Mannu, how did you forget this is my house, I know every corner of it. He pushes Sushila and jumps to open door. He keeps stool and opens door. Sushla asks Amba to catch him, he is a big cheat. Amba holds Mannu. Sushila smiles. Mannu asks Amba to let him go. He says I m your son Mannu. Amba gets flashes. She leaves his hand. Mannu goes. Sushila asks police to find Mannu.

Amba says Mannu asked me to leave hand, and I left, why, who is Mannu. Jai checks CD and sees recording of Yuvraaj and Sushila killing Bebe. He says this proof will end Sushila’s leela, don’t worry partner, I m coming. He asks doctor to treat Bheeru, I will get money. He gets a call. Lady asks what are you doing, all money ended in account. Jai says don’t worry, I m spending money on right thing.

The Heir 21 August 2019 Update ends as Jagan scolds Sushila for missing Mannu. Mannu sees them. Sushila says go and drop Amba to Lala, take money from him, Mannu will come out on own, then police will catch him. Mannu hears all this. Jagan calls out Amba. Mannu says now I will be ahead of Sushila and save Amba.