The Heir 4 August 2019 Update begins when Mannu thinks what to do. He sees Charan’s ink pen and applies ink to face. Bebe asks Mannu to go and wash face. He takes clothes. Bebe says he has grown up and will not wear clothes infront of everyone. Amba worries thinking of Jagan’s words. Mannu comes wearing sherwani. Everyone smile.

Mannu takes Charan’s coat and Pagdi. Amba says it will be bigger. Charan used to wear it even now. Bebe says its been 7 years now Amba. They get sad. Mannu comes wearing the long coat and pagdi. They laugh. Amba sees a paper falling from the pocket.

Amba goes out and reads the letter. She sees Charan’s letter for Gauri. Charan writes Gauri, I m your culprit, I just gave you sorrow, I have two daughters and family, I can’t think of leaving them, Lord knows I think of you and my son, my heir. Amba cries. She thinks Charan had another family, wife, son…..He apologizes to Gauri for not making his son his legal heir. She runs inside the home.

She checks Charan’s old suitcase and gets Gauri’s letters. She thinks of Charan. She cries and says no, Charan used to love me a lot. Its morning, Amba goes to Bebe. Bebe talks to her and asks who was Gauri. Bebe says he was Charan’s friend, did he not tell you, she was my Maayka’s neighbor’s daughter, Charan and Gauri used to play a lot, they once reached temple and said they want to marry. Bebe laughs. Amba says then why did he not marry.

Bebe asks what, why did you ask her. Amba says I was going to your village, my friend stays there. Bebe says go, I will manage kids, who is your friend. Raavi hears them. Amba says my childhood friend. Raavi tells this to Jagan and Sukhi. Jagan asks why is Amba going there. Amba asks Simran to take care and asks Mannu to listen to Simran, Mannu’s truth should not come out. He asks her not to worry. Amba says Raavi is at home, Jagan and Sushila are close, they would be thinking some new plan.

Sushila says I will follow Amba, Jagan you keep an eye on Mannu. Raavi says what are you doing, my baby will get affected. Jagan calls her fool. Amba takes ticket. Sushila follows her. Amba calls landline and says who is talking on landline for long. Mannu talks to Raj on phone and asks him to talk to Harjeet. Raj says Harjeet is not talking to anyone and being alone. Mannu says we will meet and think what to do. Simran asks Mannu not to go, mummy stopped you, I can’t leave you alone, secret will come out.

Bebe asks what secret. Mannu and Simran get shocked. Mannu says we were talking of Jagan. Simran says yes, truth has come out now. Bebe says don’t know what will Jagan do now, Sushila is with him. Amba reaches the village. Sushila follows her. Amba recalls Bebe’s words. Sushila gets a call. Amba hears the ring and turns to see. Sushila hides. Amba says I thought its Sushila. Sushila talks to Jagan and says yes, I m after Amba, I will call you. He says I will manage Mannu, he will come out, I will not leave him this time.

Bebe talks to a lady. The lady gets a problem and asks Bebe to decide. Bebe says Jagan is not Shah, Mannu will decide for your problem, you can take him, his justice and decisions are great. Mannu recalls Simran’s words. He says but Bebe, I can’t go alone. Bebe says this is your responsibility, go and take decision, show everyone that you are Charan’s Waaris. Mannu thinks what to do. Sukhi cheers for Mannu and says I will go with Mannu. Bebe asks Sukhi is he doing anything for Jagan. Sukhi says no. Bebe asks Mannu to go, you will learn work like this. Mannu leaves. Bebe smiles. 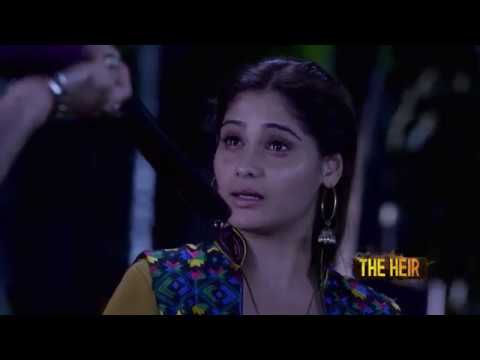 Amba reaches Gauri’s house and thinks of Charan’s words. She asks a lady about Gauri. The lady says she passed away two months before. Sushila looks on. Harjeet makes food for himself. Raj goes to Harjeet and says we lied to you, but all the things were not lie. I really like to be with you, if you leave anger, we all can stay together, Mannu said this. Harjeet gets angry and leaves.
Mannu knows the problem of the lady, and talks to both the women.

The Heir 4 August 2019 Update – Mannu asks them to divide the kalash into halves and get their share. They all find it right decision. The lady says I don’t want gold, its about feelings, its memory, I will give this away by my wish. Mannu tells decision that the lady who values the kalash by heart will keep it. He says its not about gold, its about kalash, I intentionally told to make it half, to know who values it. The people praise Mannu.

An evil woman feeds laddoo to Mannu. Sukhi asks won’t you give me laddoos, I m Mannu’s elder brother, and eats laddoos. Simran comes home and asks Bebe where did Mannu go. Bebe says Mannu went to take a decision, he will come, Sukhi went with him, don’t worry, have food till then. Gunjan asks Simran for food. Simran thinks how to tell Bebe, Mannu’s life is in risk.

Mannu walks and gets dizzy. He faints. Raj is on the way and sees Mannu. The goons put Mannu in the sack and take him. Raj gets shocked and says where are they taking Mannu, I have to see. Raj tries and climbs the truck. Simran looks for Mannu and worries. She asks Jagan about Mannu and Sukhi, they did not come home.

He scolds her and asks her to go. She meets Raman on the way. Raman asks did you see Raj and Mannu. She says no, I m finding Mannu. He says Raj said he is going to meet Mannu, they will come back, if they are together, there will be no problem.

He says we will go home, maybe they came home, if they don’t come, we will meet here again. Someone looks on. The goons tell Jagan that Mannu is in sack. Jagan pays money to them. He says Bebe was making Mannu the Shah, see now. He sees Raavi hearing him. Raj gets inside the truck.

Amba asks did anyone else stay with Gauri. The lady says yes, her son, they both stayed alone, I asked her where is her husband, she did not say. Amba recalls Bebe’s words. She asks about Gauri’s husband. The lady says he came 8 years ago and did not come back, then one day Gauri said he was killed. Amba recalls Charan’s death. Sushila looks on.

Jagan tells Raavi that he has sold Mannu, now Mannu can never come back, the man will take Mannu far away, then Mannu will not exist. He laughs. Raj tries to wake up Mannu. Raj gets a water bottle in the truck and puts water on Mannu. Mannu wakes up and says Raj. Raj asks him to be quiet and frees him. Mannu asks how did I come here. Raj says I have seen some men putting you in truck. Mannu sees the men and says they are kidnapping us, we have to leave from this truck. Raj asks how. Mannu says there is a way. He tells the plan to Raj.

Amrit worries for Raj. Raman says he went with Mannu, he will come soon. Harjeet says he is useless, don’t know how is he born in my house. Swaroop scolds him and says one day, Raj will make your name shine. Harjeet says what do you care, I have just Rohan in this house, he went to city to study, else he would have been with me, I m fine alone and will show you all your place soon. The Heir 4 August 2019 Update – Zee World

Mannu and Raj throw the drum down the truck. Driver stops the truck hearing the sound. Mannu and Raj get down the truck. Raj’s walking stick gets stuck. The man catches them. Raj says save us….. help. Simran waits for Raman and says maybe Raj reached home, where is Mannu. Raman comes to meet her. She asks about Raj, I told you something is wrong, where did Mannu go. He says don’t worry, they will be in pind, we will find them. He sees Raj’s walking stick there and worries.

Mannu and Raj are tied. The men are happy to get two kids by paying for one boy. Bebe asks where is Mannu. Simran says don’t know where is Mannu, Sukhi said Mannu left. Bebe worries and asks her to call police. She goes to Jagan and beats him with a stick, asking where is Mannu, what did you do, tell me. Jagan asks her to stop it and say what happened. She says Sukhi took Mannu, I know you have done this, Mannu did not come home. Jagan says why will I do this. Bebe says you are that animal who will not even leave your own kid. She scolds him.

Jagan says you could not manage your Shah, whats my mistake. She says if anything happens to Mannu, I will not leave you. He asks her to go and find her Shah. She sees Sukhi and asks where is Mannu. Sukhi says I don’t know, Mannu left. Bebe leaves. Jagan smiles and says Mannu will not come back, find him Bebe.

The lady tells Amba that Charan loved you a lot, any woman will find herself lucky to get such a loving husband, he was dedicated to you. Amba recalls the old lady’s words. Amba says I will make a call, I did not leave Mannu alone at home. She calls home. Simran is trying to call police. Amba gets line busy. Her friend asks her to call home later and have tea. Mannu and Raj wake up at some place, where many kids are kept. They see the dangerous place. They ask the kids to open their hands. The kid ask who are you. Mannu says I m Mannu, he is my friend Raj. The kid goes to help them. Raj asks why are we here. The kid says we are trapped by Dumroo dayan. Mannu and Raj get freed and look around. (The Heir 4 August 2019 Update)

Mannu says someone is fooling, my Mama said there is nothing like daayan. Kid says the tiger of dayan eats the kid who says there is no dayan. Mannu starts laughing and asks how can this pic eat anyone. The kid says we have seen this tiger swallowing kid. Mannu says no, I can’t believe this. Dayan comes there. All kids get scared. Mannu looks on. Raj gets Mannu away. Dayan sees Mannu and Raj, and laughs.