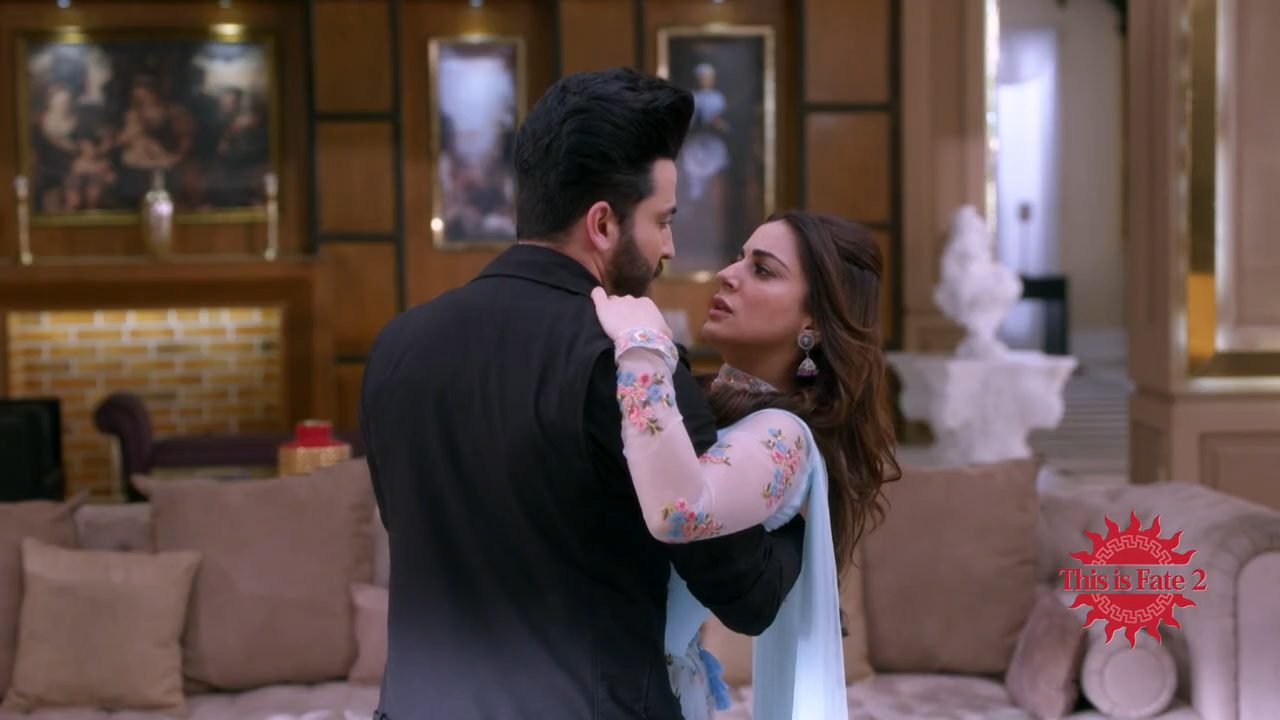 This is Fate 22 November 2020 Update starts as Sarla asks Preeta why did she not think even once of the reason she married karan, Sarla explains that she loves the family a lot and so even when she prohibited her she risked her life to save the Luthra family then what happened that when they both said a few things to her she came back running to her mother,

Sarla exclaims that she cannot end her marriage with Karan as Preeta loves them a lot so how can she be so scared, she must realize that she can do anything if she wants to, Sarla says that nothing that Sherlin and Maira say can mean anything, she also mentions that she cannot trust Karan as he is not a good person but she has married him because of the danger his father is in and also to protect the entire family.

Prithvi is in the car thinking of the slap from Sarla, he shouts that she cannot stand even before him and has slapped him but now he will take revenge and it will happen tonight so he starts driving faster to come and take revenge for his respect.

Sarla mentions that she should not have come back as she can become bad for the good cause and it is not something to be ashamed off as she knows from her soul that she is a good person but will know from her inside that she is not doing anything wrong, she exclaims that one has to take care of respect by one own self as no one can stand beside her but she has to be ready, she knows that a child always has to stand behind her mother and do each and everything by her grace but some fights have to be fought with patience so she must fight.

She will always stand by her daughter whenever she needs her she only has to call and she will come running to her, but they have to fight and take what is their with force, she knows that her daughter has the strength to fight the entire family,

Preeta also agrees mentioning that now she has the strength to fight this war as her mother is with her so she can do anything, she will make sure to fight against evil as she is not weak, they both hug each other and start weeping seeing which Janki and Shrishti also cry.

Karan is in his room remembering how Preeta was the one with him when he lifted the veil, he also thinks of how she was thrown out of the house, he takes the bottle of alcohol exclaiming that nothing that Preeta wants will happen as he will not be able to forgive her.

The entire Luthra family is in the hall, Dadi asks Ramona to not worry as Maira will be a member of their family, Ramona mentions that Rakhi should be the one to accept it as only then will Karan be ready, Rakhi comes asking what has happened, Dadi mentions that she has made a decision which she will have to oblige with, Karina mentions that Karan and Maira will be married the next morning. Dadi also says that she has sent Kartika to bring Karan when he comes, Maira mentions that they both will be married tomorrow, he looks at Rishab who says that it is not him who is being asked, Karan exclaims that he has no problems with it.

Prithvi rings the bell at the Aurora house, Sarla and Janki wonder who it might be as Preeta has left for the Luthra house, Janki mentions that she would have just reached the Luthra Mansion and now there will be an argument there with some exchange of words indicating the start of a war.

She opens the door to find Prithvi, he comes in even when Janki mentions that he should leave, Prithvi goes to Sarla while being drunk, she orders him to leave as he is not in his senses but he says that he was her son and was going to marry Preeta but Karan came and sat at the Mandap after deceiving them all stil she accepted him as her son In law while he was asked to leave, Prithvi demands the reason while shouting forcing Sarla to cover her ears.

The bell rings at the Luthra Mansion, Rishab asks Ganesh to open the door while everyone is still rejoicing, the door open and Preeta is standing at the gate, the entire Luthra family is shocked to see her stranding there, she takes up her suitcase and comes into the house, Rishab along with the entire family can do nothing but to see her, Maira asks that they threw her out of the house.

Prithvi looses his control and starts thrashing the house saying that karan left Preeta on the road, Sarla apologizes to him however he says that he doesnot need her apology as he was ridiculed in the society and they mentioned that his family members and friends started making fun of him which he could not bear, he also says that Karan challenged him and he lost but still Karan did not accept Preeta as his wife, Sarla gets angry asking Janki to throw Prithvi out of the house, he is not ready to leave saying that if she doesnot stop she will once again gets hurt.

Karan comes to Preet asking the reason she came to their house, the members of the NGO also enter the house, the entire Luthra family is shocked and come to stand beside Karan, Preeta says that they protect the rights of the women of the society so she came to take her right of being the wife of karan and the daughter in law of their family. Rakhi is happy with her decision while everyone else is angry

Karan asks Preeta what is happening at his house, the NGO personnel mentions that Preeta is going to fulfil her GrehPerwash as she has been married, they all introduce themselves, Ramona mentions that she knows what they do and they are not doing the right thing however the NGO personal do not listen to her asking who is her mother in law, Karina also gets mad at her,

Preeta goes to Rakhi mentioning that she loves her and is her mother in law, Rakhi however mentions that she is not her mother in law, Preeta moves to Karina mentioning that she talks angry and has a spicy attitude but all the relations are because of her and she is also her relative, Preeta moving to Dadi explains that she is the elder of the house, and everything in the house happens because of her.

Preeta moving on mentions that Rishab is her best friend and the one who earns in family, she also mentions that Sameer is a bit naughty, She explains that Sherlin tries to do a lot of things but is not able to do them, then she explains that Kartika is more then just a friend and like a sister to her, she also stands in front of Karan explaining that both herself and Karan are meant for each other as both their Kundali are for each other, she says that he is a person of a good heart and has the ability to take care of everyone but is now not able to see everything clearly as he is misguided, she explains that she has come to her own house so before them she will be the one to talk to her family.

Prithvi comes to stand in front of Sarla mentioning that she mentioned that Karan is her son in law but they never accept her daughter as a family member because when a daughter is married the first thing they do is to prepare food however she is always running on the streets and her daughter is never happy so she must talk some sense into her daughter that she should leave Karan and come to him, one who will always respect her and treat her like a princess, he says that if he leaves empty handed today then she will never see him come back so she must talk some sense into her as karan will never treat her with respect and the society will always blame her saying that she has gotten to a new low for Karan, Sarla gets angry and is about to slap him but is stopped by Prithvi.

Preeta says that he must not do anything wrong, Karan says that it is not her house and she must go back to where she ahs come from, Maira also comes mentioning that she is not a good person as she is calling Karan her as her husband, Preeta stops her saying that If she ever comes in between then she will have to bear the consequences, Preeta stops her from mentioning Karan as her to be husband,

Karan inquires her what she will do then, The people form the NGO say that they do not know of the consequences that they will have to face and if they do not respect Preeta, Karan’s career will be ruined, he still does not Preeta to stay in the house, Dadi also says that they are not listening to anything the entire family is saying but believing Preeta, this makes even Preeta nervous as she cannot get into the family so easily.

Prithvi is holding the hand of Sarla and when Janki tries to stop him he says that if she again tries to do it, she will get hurt, she is still not able to remove it, Prithvi says that they always treat him like a dog and he can no longer bear it so she must not do it, he again holds her hand Janki tries to remove it.

Preeta mentions that they can witness how rudely he talks with her as he is saying awful things in front of them all so they should comprehend what he will be like when they are not with her, they all say that Karan should be more careful with Preeta. Karina steps in saying that how could they say this as they should leave the house, the people from NGO say that she should calm down as Dadi stops her, they say that all of them should focus on strengthening the relations rather then stopping Karina as it is not a solution to anything that is happening in the house.

This is Fate 22 November 2020 Update ends as Maira also demands that they all leave their house. Sherlin responds to them mentioning that even Dadi does not like Preeta.

Rick Warren 2nd October 2022 Devotional Today – Can I Be Sure I’ll Get Into Heaven?

From His Heart 2nd October 2022 Devotional | Ambulances and Guardrails

Rick Warren 2nd October 2022 Devotional Today – Can I Be Sure I’ll Get Into Heaven?

From His Heart 2nd October 2022 Devotional | Ambulances and Guardrails