Zara’s Nikah 21 September 2020 Update starts as Ruksaar recalls how Zara challenged her that she cant get Kabir. She sees Zara working with Kabir on some papers. Kabir looks in Zara’s eyes, they keep looking at each other, some papers fall down, Zara and Kabir gets down to take it and touch hands, Kabir smiles at her. Zara gets up and says I am going to decorate Ruksaar’s room, Kabir is tensed.

Kabir comes to Ruksaar’s room and sees Zara decorating it, he thinks that Zara I am doing all this for you. Ruksaar comes there and says to Zara that I am spending my first night with Kabir, you have spent nights with him so what kind of lights he likes? dim? blue? yellowish? Kabir gets angry and tries to take Zara from there. Ruksaar says Kabir are you that eager to be alone with me? Zara angrily leaves from there.Kabir stops Zara and says why are you doing this? stooping low? Zara says then divorce me, Kabir says I am doing all this for a reason, Zara says me too.

Kabir says you are decorating her room to spend a night with me? Zara says no I am doing all this to test my love, tomorrow night will decide if our love will remain colorful or fade away for life. She turns to leave and says come, I have to put Ruksaar’s name on your hand with mehndi. Kabir says it will go away in two days but your name on my heart will never be removed, I am doing all this to remove Ruksaar’s from our lives, she will go away, try to understand me, think from mind, not from heart. Zara glares at him and leaves.

Ruksaar is getting ready and sees Zeenat crying, she asks what happened? Zeenat says you are too selfish, you think about yourself only, you didnt think about your sister? you will get Kabir for one night for your happiness but you will lose your sister for life, next day they will throw you out as you have signed agreement, I can see you today but from tomorrow, I wont be able to see you anymore, did you think about that? she cries.

Ruksaar laughs evilly and says you think I am a fool? you thought it was truth? She shows her agreement papers and says how can you think that I will leave Kabir? I will die but will never leave Kabir, I love Kabir way more than Zara, I cant share my Kabir with anyone. Zeenat says what is going on in your mind, swear on me, tell me whats your plan? Ruksaar says tonight will be a hell for Zara and victory for me, tonight Kabir will become mine forever, lets go, I have to make Zara apply Kabir’s mehndi on my hands. She dances around stunned Zeenat.

In function, all are enjoying. Zeenat brings Ruksaar. Ruksaar greets Ayesha. Alina comes home and meets everyone. Ayesha asks how was your competition? Alina says great. She asks what is going on in house? Ayesha says I will tell you later, go and get fresh.Amaan asks Kabir if to call him paternal uncle or maternal uncle? Kabir says I am your chachu and will remain that.

Reema says to Zara that how will you write Kabir’s name on Ruksaar’s hane? Zara says thats not important, important is if Kabir will be able to see me write his name on Ruksaar’s hand, will he not stop me? Alina comes there. She hugs Kabir and goes to Zara, she says I missed you, what function is going on in house? Zara gets tensed. Kabir calls Alina to him and starts explaining.

Ruksaar calls Zara and asks her to write ‘K’ on her hands, I was waiting for you. Zara sees Kabir busy with Alina and is jittery. Ruksaar says do it fast, apply it nicely. Zara is emotional. She is about to write K but Amaan stops her and says I will apply mehndi to Ruksaar aunt. Ruksaar says no, let her do it. Amaan says I have practiced too. Ruksaar says dont make me angry, go. Kashan says he is a kid, let him do it. Ayesha says let Amaan do it. Amaan takes cone and apply mehndi to her, he writes ‘K’ on her hand. Zara is relieved.

Amaan smirks at Kabir. Amaan writes X on her hand instead of K on her hand. Ruksaar says what is this? Amaan says I fooled you and runs from there, all snicker. Kabir smirks at Zara. Reema says you should thank him, Zara silently thanks Kabir, he nods.

Scene 2Ruksaar hugs Zeenat and cries. Zeenat says swear on me, dont play any dangerous game. Ruksaar thinks what I am going to do will either make Kabir mine forever or will never be of anyone. Zara comes there. Ruksaar thinks that doors that will close tonight will never open. She holds Zara’s hand and starts to leave from there. Ayesha comes there. Ruksaar hugs her and says forgive me for my mistakes. Ayesha is reluctant. Ruksaar leaves with Zara. 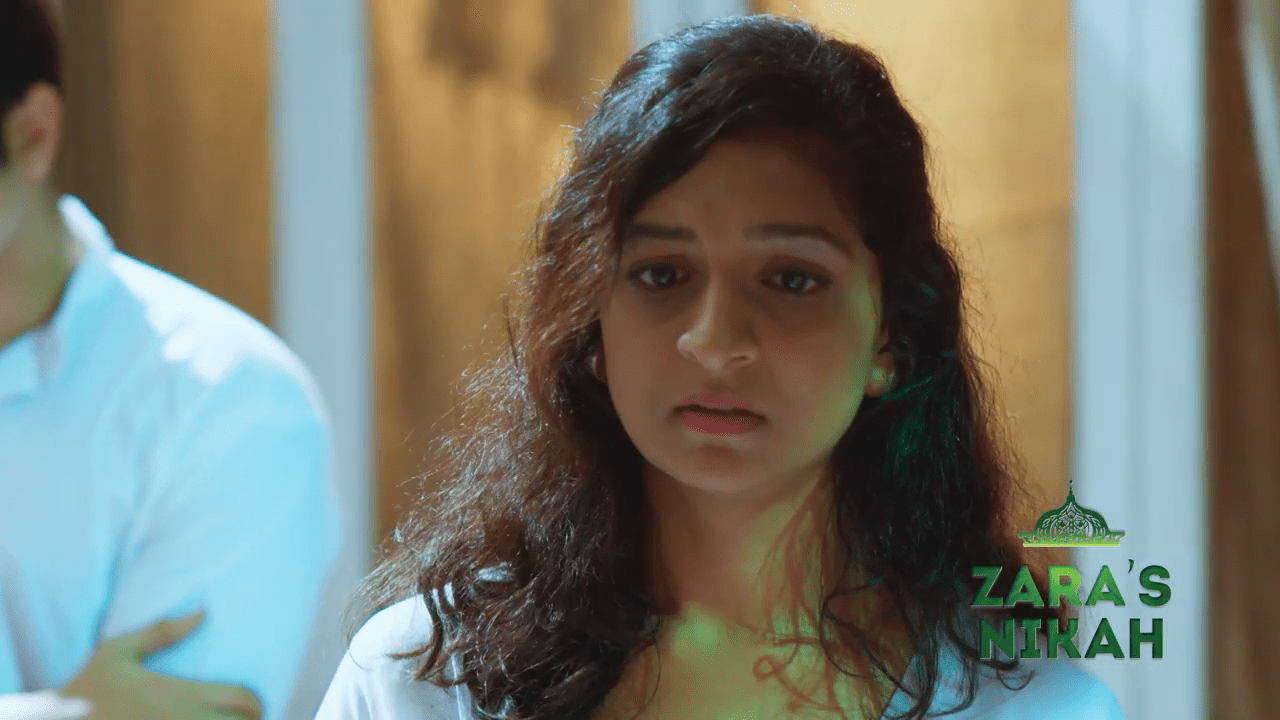 She circles some money around her and Kabir and tries to give it to Zara. Zara turns to leave but Ruksaar says keep looking at time, Kabir is yours till my room’s door is open and he will be mine as soon as door closes, goodbye. She starts to close door on Zara. Zara is tensed.

Ruksaar says to Zara that till this door is open, Kabir is yours and when this door is closed, Kabir is mine.. she closes door on Zara. Zara is tensed and paces around. She recalls how Kabir said he loves her unconditionally, how she asked if he accept her as his wife for life? how he promised to not let anyone come inbetween them, how he said he cannot share Zara with anyone.In room, Kabir starts dua to God. Ruksaar whispers to herself that I will spend tonight in Kabir’s arms and then tomorrow..

she mixes poison in juice and says we will leave this world tomorrow and be together in after life. Outside room, Reema says to Zara that he wont come, understand and come with me. Zara says he wont come? she breakdowns and cries. Reema hugs her. Reema asks her to control herself and takes her from there.

Kabir prays to God that I dont know if I am right, I am doing all this for Zara, please dont let me do anything that will tarnish this house’s honor or Zara. He turns and sees Ruksaar smiling at him, he glares at her. Ruksaar says you prayed for Zara and I prayed for you, I will get you today. He looks away. Ruksaar says I signed agreement because I wanted a night with you, now you will have to do what I want. Kabir kisses his praying beads and blows his prayers on her face. Ruksaar says wow, your prayers wiped my sins, I am clean now. Kabir says Ruksaar if..

Ruksaar cups his face and says Ruksaar cant be without sins.. think if this is my last night then how clean Ruksaar would look infront of God? so I will do sin tonight, to tease my husband, I will tease you so much.. so much.. that I will take your life. Kabir is stunned and moves away from her. She holds his arm and says dont move back, you will get Zara for life in return of this night so give this night to me. She hugs his arm. Kabir thinks and stops.

In Zara’s room, she starts packing and keeps crying. Ruksaar puts her dupatta on Kabir and starts getting closer to him, she smiles at him. Dhal jaon mein plays.. she caresses his face. Kabir holds her hand and kisses it. He says I am sorry.. I am sorry Zara.. Ruksaar is hurt hearing it. Ruksaar says thank you Zara.

Zara says to Reema that I am in this house for Kabir, I trusted him more than me, I trusted my love that Kabir will leave Ruksaar and come to me, but he didnt come, I wont stay in this for a second, I failed my love, Ruksaar was right, this is a black night for me.

Ruksaar looks at bed, she recalls how Kabir rejected her earlier. She takes off her jewelry, takes off dupatta and comes to Kabir. Kabir looks away, she giggles and says you are first husband to shy away from your wife.. he turns to leave but Ruksaar stops him and says Zara is outside and you will get in morning only, if you dont do it then I swear on God, I will not divorce you, what will happen to Zara then? you are my love, your love is Zara and Zara’s love is Kabir, she will not get her love till I dont get my love.

Zara calls Salma and asks her to clean her room, I am coming to my home.Salma calls Ayesha and says you people did injustice with my Zara, she is coming here, she has decided to leave your home. Ayesha says what are you saying? I wont her leave my son. Zara comes there with her luggage, Shahbaz says if you leave then our respect will be destroyed. Zara says to Ayesha that my love, my identity, everything has broken. Ayesha says understand Kabir, he killed his honor, his identity to go to Ruksaar’s so he could give you life ahead. Zara’s Nikah 21 September 2020 Update

Ruksaar makes Kabir lie on bed and lies on him, he is tensed and worried. He recalls how Zara walked on burning coals for him, he recalls how Zara said she can share him. Ruksaar starts moving closer to him but he gets up from bed and thinks there is Zara whom I started loving from far and there is you.. who is close but all I feel is hate. Kabir starts to drink juice but Ruksaar stops him and says I have made this juice with love, when you have spent night with me then you can drink it. She hugs Kabir tighly and says not now.

Kabir pushes her away and says its test of love. He takes coat. Ruksaar asks where are you going? you cant insult me like this. Kabir says only Zara and her love is getting insulted, Ruksaar tries to stop him but he leaves.

Zara’s Nikah 21 September 2020 Update ends as Irfan and Salma comes to Kabir’s house, they rush to Zara and hug her. Zara says to Salma that lets go from here. Salma says yes my daughter I will take you from here. They turn to leave but Kabir comes there and stops Zara.