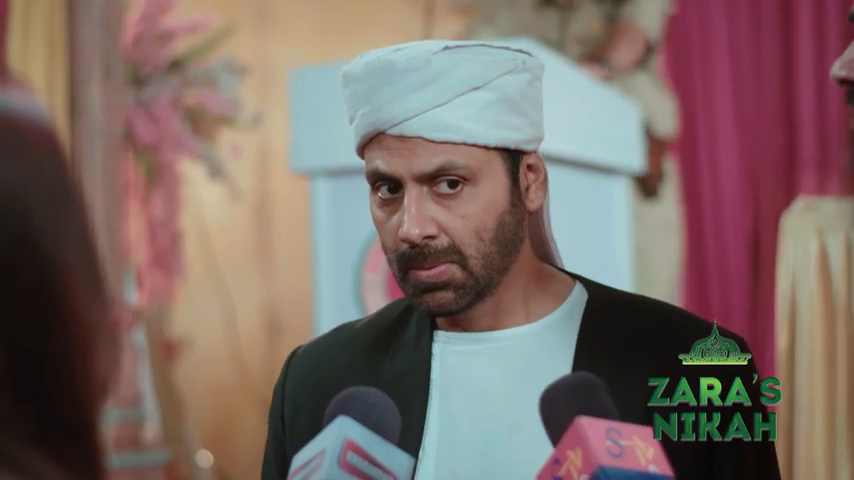 Zara’s Nikah 21st March 2021 Update Today’s episode starts with Kabir saying what about my promise to the sharia board. Zara says my happiness is not with this, I am not going to marry and you can’t force me. Kabir says you are destroying your life so I will get you married. Zara says even my parents can’t force me to marry then who are you? God has given me the right to say no to any guy. You are just being selfish. She leaves from there.

Shahbaz tells Jalali that Zara said no to Kabir and when Kabir can’t fulfill his promise then he will have to leave his chair. Jalali says this means Zara’s love for him is not ending, Kabir protects her too so he might get married to Zara. Shahbaz says I will never allow that cheap girl to be my daughter in law.Salma tells Irfan to talk to Kabir. Kabir punches the bag and says I am not selfish.

Irfan comes there and saya Zara said all that because of her love for the kids.Zara tells Salma that Kabir wants me to leave the kids, can’t he see my love for him? If I don’t get Kabir then I will not accept anyone else.Kabir tells Irfan that Zara has to get married at any cost. Irfan says she doesn’t have right to say no to the marriage but you can’t force so don’t fight and find a solution.

Zara tells Salma that I won’t say sorry to Kabir, he is wrong. Salma says I pray that your unity with Kabir doesn’t break.Kabir doesn’t sit with Zara and eats his own food. Firdous says you don’t want to eat the parathas that Zara made? Zara says he is being rude. She offers the paratha to him but he asks her to stay away. He asks the kids to leave for school. He leaves. Zaid asks Zara if she fought with Kabir? Firdous says they are smart and good people so they don’t fight.

Zara comes to Kabir and says I don’t want to learn the bike riding. Kabir asks her to just wear the helmet. Zara says you want to fulfill my wishes and then get me married? Kabir says I promised to get you married and I will fulfill that. Zara says I am not going anywhere with you, you can force me if you want.

Kabir comes near her to pick her up but stops as he gets a call. He says what they are closing the school? The kids come back and ask Kabir if they are going for a bike ride? Kabir says yes but Zara is saying no. Zara thinks that the kids will think we are fighting so she says no, I am going with you. She goes with Kabir.

Ruksaar locks Alisha in the room and calls Kabir. She says Alisha… she is locked in the room and it can’t be opened. Zaid locked it. Kabir says I know you are behind this, open the door. Ruksaar says I am trying but I can’t. Kabir ends the call and tells Zara that he has to leave.Alisha cries in the room. Salma hears Ruksaar telling her goon that Kabir will come here to save Alisha so Zara will be alone, crush her with your truck.

Salma is shocked.Salma comes to Alisha’s room and opens it. She says everything is fine. She calls Kabir and says Alisha is fine but don’t leave Zara alone, she is in danger. Kabir is shocked. Kabir starts running to save Zara. He sees a truck following her and recalls how he had seen his Zara’s accident. He shouts at Zara to see the truck. Zara screams and drives faster. Zara’s Nikah 21st March 2021 Update

Kabir is running to get to her. He jumps and pulls her away before the truck can hit her. They both lie on the road. Kabir is worried.Zara and Kabir are in the car. Zara recalls Kabir saving her. She says I am sorry, you had to put your life in danger. She sees a wound on his hand and says let’s go to the hospital. Kabir says I am fine. Zara says we are going there. The driver gives her a first-aid kit.

Kabir cleans his wound.Salma blesses Zara. Irfan asks Kabir to take care of himself. Zara asks Kabir why is he worried? He says nothing and leaves.Kabir comes to his room and says thank God Zara was fine. Zara comes there. Kabir says to himself that how to tell Zara what is going in my mind.

Jalali twists Ruksaar’s arm and says how dare you try to kill ara? I could kill her easily but she is my enemy. Shahbaz says what’s worst than death? Jalali says I want to give her a life worst than death, I will break her honor.Kabir comes to his room and recalls his Zara’s death and then Zara’s accident. He thinks what if anything happened to Zara? Zara comes there and says I have a medicine for you. She puts it on the table and says are you fine? You look worried.

Kabir says nothing. Zara says I just want to ask why you are worried if I was close to death? Do you care for me? Kabir glares at her and says the question you are asking is wrong, stop finding feelings in me, think about yourself and your life. Zara says come out of the dark, can’t you think about me for a second? Kabir says stop it, I don’t want to listen to this filth. Zara says you have to listen to me, it’s my feelings.

Zara’s Nikah 21st March 2021 Update ends with Salma coming there and says stop it, you both fight too much. You both are surrounded by enemies and you are fighting? Become one and fight against them. She tells Kabir that Ruksaar planned to kill Zara. Kabir is shocked.